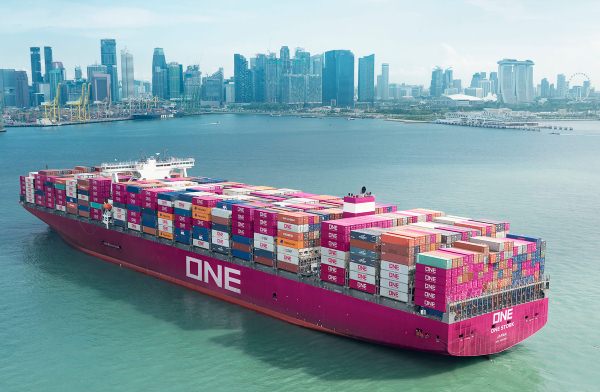 ONE has signed a letter of intent with Shoei Kisen Kaisha for the 15-year long-term charter of the six ultra large container ships (ULCSs), said a company release dated December 24.

ONE is a joint venture between Japanese ship owners NYK, MOL, and “K” Line, and is a member of THE Alliance.

The new buildings are to be built by the consortium of Imabari Shipbuilding Co. and Japan Marine United Corporation and are expected to be delivered in 2023-2024.

“This new class of ships will join our core fleet and forms part of our ongoing strategy to introduce large, modern, and fuel-efficient vessels to further strengthen our fleet competitiveness,” ONE said.

Currently, the world’s largest ULCSs have a maximum capacity of slightly below 24,000 TEUs.

The six new ULCSs “will help bring economies of scale and significantly lower carbon emissions through a state-of-the-art hull design that aims to maximize cargo intake and minimize fuel consumption,” said ONE.

The vessels will be equipped with exhaust gas cleaning systems to meet the emissions regulations of the International Maritime Organization.

The trend in ordering ULCSs has continued following the recent signing by German ship owner Hapag-Lloyd of an order for six new 23,500-TEU vessels from Daewoo Shipbuilding.

Platts Container Index, a weighted average of 12 container rate assessments covering major shipping routes around the world, jumped 241% from one year ago to US$3,561/FEU on December 24 as demand for capacity greatly exceeded supply.

Photo courtesy of ONE