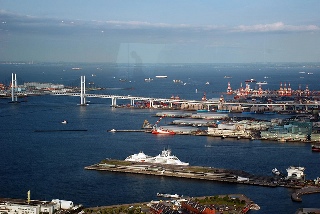 Orient Overseas Container Line (OOCL) has released the details of its network service expansion to the Asia-North America trade lane under the revised vessel-sharing agreement of the G6 Alliance, of which the carrier is a member.

OOCL will offer its extended trans-Pacific services beginning May 2014.

The first sailing will be APL Hong Kong with an expected time of departure Singapore on May 8 and ETD Los Angeles on June 8.

The APL Paris takes first sailing with an ETD Xiamen on May 8 and Los Angeles on May 29.

The OOCL Shenzhen leaves Dachan Bay with an ETD May 11 and Long Beach May 31.

Hyundai Busan leaves with an ETD Shanghai on May 15 and Los Angeles on June 1.

First sailings will be Hyundai New York with an ETD Ningbo on May 13 and Los Angeles ofn June 1.

Initial sailings will be NYK Triton having  ETD Shanghai on May 19 and Los Angeles on June 5.

OOCL Luxembourg sails for the first time on this service with ETD Singapore on May 13 and Vancouver on June 6.

Hyundai Courage makes the initial voyage with ETD Hong Kong on May 17 and Tacoma on June 4.

The Vienna Express takes off with ETD Qingdao on May 13 and Tacoma June 3.

Eastbound first sailing is NYK Meteor with ETD Shanghai on May 12, and westbound trip is Box Trader with ETD Halifax on May 26.

Eastbound first sailing is the MOL Efficiency departing Kaohsiung May 11; westbound sailing is Margrit Rickmers ETD New York on May 24.

In addition, OOCL said it will continue to offer these services as part of its trans-Pacific network: