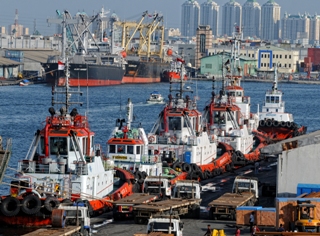 The Indonesian government will construct a new container terminal at the country’s premier ocean gateway Tanjung Priok Port in Jakarta in partnership with foreign companies.

“This new terminal will be developed and operated by the newly established project company PT New Priok Container Terminal One (NPCT1),” according to an official joint statement.

“The Republic of Indonesia has in recent years experienced dramatic economic growth accompanied by a rapid increase in container traffic,” the statement continued. “Jakarta’s Tanjung Priok Port is the most important and largest port in Indonesia, handling the majority of Indonesia’s international container traffic. To support the vibrant trade, there is an immediate need to increase the port capacity and handling capability.”

Target annual handling capacity is about 1.5 million twenty-foot equivalent units (TEUs) of containers. Overall berth length will be 850 meters and draft is to be 16 meters to allow the terminal to accommodate mega container vessels of today.

“NPCT1 will also pursue the efficient reduction of emissions, and energy conservation and environmental protection activities such as a ‘Green Terminal’ by exploring the use of environmentally friendly facilities such as ‘cold ironing,’” said the report.

Tanjung Priok Port, the world’s 22nd busiest container port, handled 6.59 million TEUs in 2013. There are as yet no details on the timeline of the project or the size of the investment.

“Participation in the construction and operation of the new container terminal at Jakarta’s Tanjung Priok Port will help Mitsui to benefit from the growth potential of high-growth economies in Southeast Asia and to expand its involvement in logistics infrastructure projects by accumulating knowledge and expertise that can be used in the development and management of projects,” said Mitsui.

PSA, meanwhile, said the New Priok Container Terminal One will be its first project in Indonesia. “PSA will leverage on its global expertise and experience in operating container terminals worldwide and in training skilled port professionals to develop NPCT1 into a world-class facility to support Indonesia’s growing economy and facilitate the expanding maritime trade,” it added.

Indonesia is currently developing a US$55-billion maritime highway program that envisions the establishment of 24 commercial seaports and more than a thousand non-commercial seaports around the archipelago as part of its ambitious drive to become a world maritime axis and reduce logistics costs.