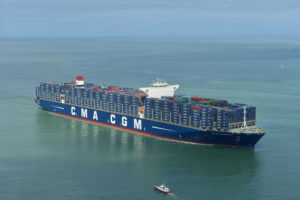 French container shipping company CMA CGM said it intends to make heavy investments to comply with the impending low sulfur regulation for shipping, and in view of this, it will have to “review our sales policy regarding fuel surcharges.”

In a statement released September 24, CMA CGM said it has decided on two things: to favor the use of 0.5% fuel oil for its fleet, and to make significant investments necessary to comply with the new International Maritime Organization (IMO) regulation.

These investments will entail using LNG to power some of the group’s future container ships (nine ships on order), which it said will notably result in a 99% reduction in sulfur emissions, as well as ordering several scrubbers for its ships.

The IMO low sulfur regulation will be effective from January 1, 2020 and will require all shipping companies to reduce their sulfur emissions by 85%. This new regulation aims to reduce the environmental impact of the industry and significantly improve air quality.

CMA CGM said all the measures it will undertake “represent a major additional cost estimated, based on current conditions, at an average of 160 USD / TEU (twenty-foot equivalent unit).”

This additional cost will be taken into account through the application or adjustment of fuel surcharges on a trade-by-trade basis, it further said.

“The implementation of this new regulation, which represents a major environmental advance for our sector, will affect all players in the shipping industry,” explained Mathieu Friedberg, senior vice president of commercial agencies network.

“In line with its commitments, the Group will comply with the regulation issued by the IMO as from 1 January 2020. In this context, we will inevitably have to review our sales policy regarding fuel surcharges,” he added, without giving further details.

Last September 17, Danish container shipping and logistics group A.P. Moller-Maersk said it will introduce a new Bunker Adjustment Factor surcharge by early next year to enable its container shipping operations to recover the cost of compliance with the upcoming global sulfur cap.