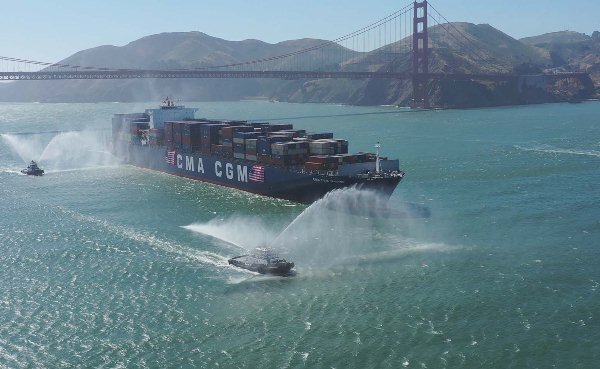 Shipping and logistics group CMA CGM will introduce this month a new direct service from Asia to Port of Oakland in the US, saying it is the first and only transpacific carrier to offer this kind of direct service.

The new service, to be called the Golden Gate Bridge (GGB) service, will have its first call in Oakland on February 12, the company said in a statement.

Calling Oakland first from Asia will help meet market demand while also providing some relief to the congestion at the Los Angeles and Long Beach ports, it added.

The GGB service (previously Seapriority Express) will first call at the Port of Oakland on its route from Shanghai and Yantian, China. It will remove the Port of Los Angeles from the current route and “enhance service by providing customers with an innovative and creative fast-transit alternative that enables them to avoid congestion.”

The expanded service will also include Seattle, allowing for new capacity to Pacific Northwest customers.

CMA CGM added that it has implemented several initiatives to make the shipping and logistics supply chain as seamless as possible, despite an exceptionally strong demand, particularly in the US. It noted that over the past six months, demand for goods transportation has bounced back sharply from the contraction caused by the COVID-19 pandemic in the first half of 2020.

The container shipping liner has increased capacity in the US by 39% between the first and second half of 2020. Among actions taken to ramp up capacity include:

To assist with the container shortage and port congestion, the carrier has taken several measures to speed up the return of empty containers to Asia and to cut delays at the ports it serves in the US, Asia and Europe.

In the US, CMA CGM has doubled the number of dedicated chassis in Southern California, broadened the base of truck providers to get containers in and out of the terminals more quickly, worked with rail partners to bring additional rail cars through Southern California, and split calls between ports to increase velocity at berth.

Globally, the group has also created service solutions to redistribute freight to ports less impacted by the congestion. During the second half of 2020, CMA CGM has increased the size of its container fleet by 8.7%, services have been rerouted to clear the build-up of empty containers, and the company is offering customers alternative solutions that use other types of containers to meet their needs.