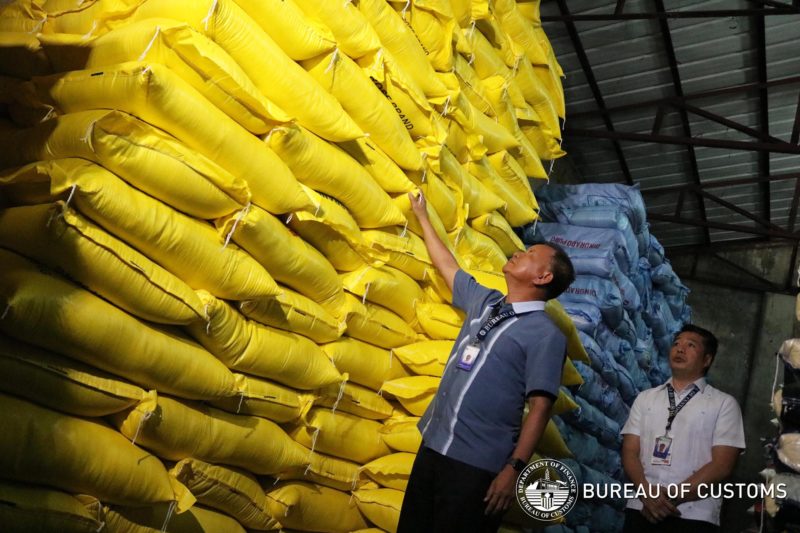 The Bureau of Customs (BOC) has seized P25 million worth of alleged smuggled rice in a warehouse in Calamba, Laguna.

“We received a tip that there [were] various sacks of rice stored in a warehouse in No. 234 J.P. Rizal Street, Calamba, Laguna. Our Enforcement and Security Service (ESS) conducted a surveillance to validate the presence of the alleged smuggled rice. Upon confirmation of the presence of rice, I immediately issued a letter of authority no. 07-24-042-2018 to inspect and visit said warehouse,” Customs Commissioner Isidro Lapeña said in a statement.

Initial inventory conducted by the ESS showed that about 10,000 sacks of rice imported from Thailand and Vietnam were inside the warehouse.

“Based on the report of ESS director Yogi Filemon Ruiz, the rice is consigned to a certain Marcelo Rice Trading while the warehouse is owned by a certain Henry Uy and Jason Feng,” Lapeña said.

The warehouse owner and the consignee were not on the premises during BOC’s raid on July 26. ESS agents, however, found the company accountant, Janice Peng, and demanded proof of payment for the duties and taxes of the imported rice. But no documents proving the payment as well as the corresponding import permit were presented.

Section 224 (Power to Inspect and Visit) of the Customs Modernization and Tariff Act gives the customs commissioner or any of his authorized officers the right to demand evidence of payment of duties and taxes on imported goods that are openly for sale or kept in storage.

“The interested party is given 15 days to prove or show the source of the goods and the payment of duties and taxes. If they fail to do so, the goods will be seized and subjected to forfeiture proceedings,” Lapeña said.

BOC, in coordination with the National Food Authority (NFA), which oversees the importation of rice into the country, has an ongoing investigation to determine whether the imported rice was smuggled.

However, as of press time, upon checking with NFA and the records of BOC, there appeared to be no import permit issued to Marcelo Rice Trading.

“Despite the need to address the rice shortage in the country, it is also our mandate to protect the interest of the government and the people especially our own rice farmers,” Lapeña said.

“I will not let these smugglers and their protectors manipulate the prices of rice and let the Filipino people be at a disadvantage. Our President Duterte is already rallying for the rice tariffication bill so our importers will be given much more freedom to import the staple food of the country,” he added.

The rice tariffication bill seeks to remove quantitative restrictions on the importation of rice. It aims to amend Republic Act No. 8178, also known as the Agricultural Tariffication Act of 1996, to reform the agricultural sector.

Lapeña appealed to the importers to give what is due to the government. He also ordered all ports to remain vigilant and stop all forms of economic sabotage.