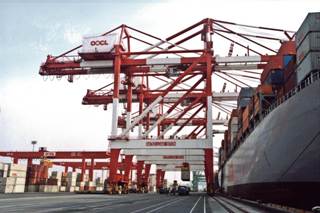 To be leased to NYK Line of Japan, the vessel is the fourth in a series of ten 13,208-TEU box ships ordered by OOCL from Samsung Heavy Industries.

The newbuild will be deployed in the LP4 service of the Asia-Europe trade on a 77-day round-trip schedule. Its port rotation will be Ningbo, Yangshan, Yantian, Singapore, Suez Canal, Le Havre, Southampton, Hamburg, Rotterdam, Suez Canal, Jeddah, Singapore, Yantian, and back to Ningbo.

Maersk Line is scheduled to receive the first of its 20 triple-E ships, the world’s biggest container ships so far, in the middle of this year.

South Korean shipbuilder Hyundai Heavy Industries won the contract from CSCL to build the mega ships that will be deployed on the Asia-Europe trade lane.