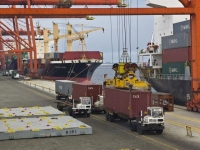 International Container Terminal Services, Inc. (ICTSI) on Wednesday said the Manila truck ban will slow down Philippine growth, noting that the real culprit in road congestion is the country’s lack of infrastructure.

Government and city officials, including those from Manila, have resorted to trucks bans in their desire to lick the congestion problem.

Starting February 24, the city of Manila has banned eight-wheeler trucks and vehicles with a gross weight above 4,500 kilograms from plying Manila’s streets between 5 a.m. and 9 p.m. But following massive protest by the business community, a temporary concession was put in place, which allowed trucks to operate between 10 a.m. and 3 p.m. on certain streets in the next six to eight months.

“What is lacking, and what has been lacking for the last few decades, is road infrastructure. Congestion on land is largely a result of lack of road infrastructure to match the growth of the economy. The low utilization of outports is likewise driven by poor road infrastructure. No shipping line or customer of a shipping line will want to use Batangas or Subic if it cannot get the majority of imports destined into the capital through the roads,” Gonzalez, who is also MICT general manager, said.

Gonzalez also reacted to a statement by Rep. Raneo Abu of the 2nd District of Batangas on congestion in the Port of Manila. The solon has pushed for the use of the underutilized Port of Batangas to decongest Manila ports.

Abu had claimed that 66% of shipments which arrive at the Port of Manila are for the Calabarzon area, with 43% for Laguna, 15% for Batangas and 8% for Cavite.

“I am extremely surprised about the irresponsible use of the statistic of 66 percent of trade being bound to and coming from Calabarzon,” Gonzalez said.

He noted that the market is made up of approximately 1.4 million TEUs of imports, majority of which are consumption goods utilized in and around the capital.

About 500,000 TEUs are exports, spread across Calabarzon but with most coming from Cavite on the Manila Bay side, areas inaccessible by road from the Port of Batangas, claimed Gonzalez.

Approximately 900,000 TEUs are empty containers, a result of the trade imbalance, and from which majority of truck movements are created because of multiple handling. The remaining 900,000 plus TEUs are containers used for domestic movements around the archipelago, he added.

Against this backdrop, Gonzalez said the whole Port of Manila handles about 3.8 million twenty-foot equivalent units (TEUs). Batangas, on the other hand, has a theoretical maximum capacity of no more than 300,000 TEUs.

Manila has 24 ship-to-shore cranes and more than 70 yard gantry cranes, while Batangas has 2 and 4, respectively.

“Those are the facts, and those are the statistics, and people need to start understanding them in order to develop proper sustainable strategies to keep trade moving and our economy growing,” said Gonzalez.

“I am very worried because if this goes on for another three days, it will be very bad, which could lead to suspension of work. If I’m a company that produces 200 trucks a day, where will I stock them up? The best that I can do then is to lessen production,” PEZA director general Lilia de Lima said on the sidelines of business forum Arangkada on Wednesday.

She said the window that allows trucks to ply Manila streets “is not enough, that’s why we’re also eyeing proposals and palliative solutions to resolve this.”

Most affected are ecozones within Calabarzon, which account for about 80% of the total exports registered under PEZA. The region’s total exports amount to $77 million daily, generated by around 800 companies that employ more than 200,000 workers.

One of those affected by the ban is the HRD Group, whose five companies ship a total of 400 40-foot container vans daily, according to De Lima. Of the aggregate, “probably only one fourth… can go through (Manila) given the truck ban.”

The FPI, an umbrella organization of manufacturers in the Philippines, meanwhile wrote Manila Mayor Joseph Estrada, asking him to reconsider the truck ban and study the issue more carefully as this will “seriously disrupt the vital flow of goods that sustain commercial operations.”

In its letter, FPI said, the ban “will cripple business and the economy, particularly considering the strategic location of the City of Manila relative to the Port of Manila as well as the manufacturing and commercial operations.

“Undeniably, night delivery will entail added costs, as various businesses that usually operate only during daytime will now be constrained to operate in the evening to prepare and receive deliveries. This will certainly affect the competitiveness of the local manufacturing industries that are struggling just to survive during these trying times.”

The association noted night deliveries are more vulnerable to theft, pilferage and hijacking.

“Indeed the convenience of the riding public is as important as the movement of goods as this will affect the supply and demand in the market,” FPI said.