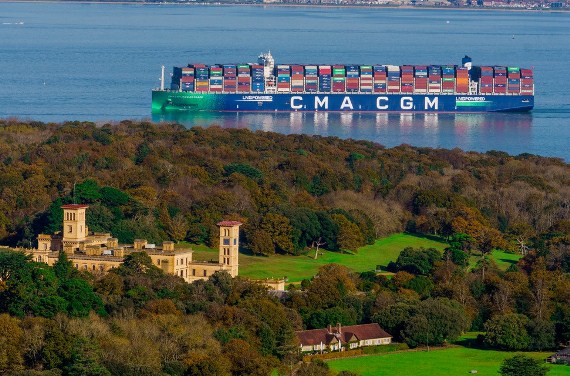 Container shipping giant CMA CGM achieved an “excellent” third quarter with a net income of US$5.6 billion, a massive acceleration from $567 million recorded in the same period last year, even as the carrier expects even better results in the fourth quarter as demand remains high and container capacity tight.

Consolidated EBITDA came in at $7.1 billion in the third quarter, up 318% from $1.7 billion year-on-year. EBITDA for shipping was $6.8 billion, the earnings driven by average revenue per TEU of $2,293 and achieved despite higher operating expenses, said the company in a news release.

Consolidated revenue was $15.32 billion, higher by 89.4% from the same quarter last year and mainly driven by the group’s shipping activities, which reached $12.5 billion, representing a 101% increase compared with the same period in 2020.

During the third quarter of 2021, CMA CGM transported 5.5 million TEUs, representing a 2.5% decrease compared with the third quarter of 2020 when global trade rebounded markedly following the end of COVID-related lockdowns in Western countries. Growth in volumes is currently constrained by congestions affecting port terminals and inland infrastructures, leading to longer transit times for vessels, the release said.

Logistics revenue reached $2.9 billion, representing a 55% increase compared with the third quarter of 2020.

Rodolphe Saadé, chairman and CEO of CMA CGM, said: “We delivered very good financial results this quarter, enabling us to continue our development and accelerate our transformation.”

CMA CGM will continue to step up investments to support the group’s strategic growth.

In shipping, the current fleet of 20 e-methane-ready vessels in service will have a total of 44 by the end of 2024.

To support the growth of its shipping trade lanes, the shipping liner has launched several port investment projects since the start of the year, including the proposed acquisition of the Fenix Marine Services terminal in Los Angeles.

The four Airbus A350F on order have a carrying capacity of more than 100 tons and an operating range of some 9,000 kilometers the A350F, and will enable the airfreight arm to reinforce its long-haul offer to better serve its customers and their markets.

The group also bared its decision to make CMA CGM Air Cargo a French freight airline, and has filed an application for an Air Operator Certificate with the French Civil Aviation Authority.

Looking ahead, the French container carrier, one of the world’s largest, said the pressure on effective shipping capacity for consumer goods observed since the summer of 2020 is expected to persist until at least the first half of 2022.

This means the group will likely achieve an even stronger financial performance during the fourth quarter, it said.