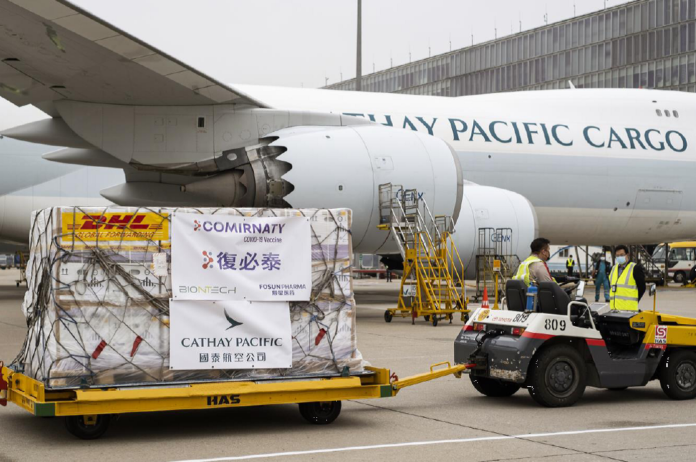 Flag carrier Cathay Pacific announced that it has successfully delivered over 500,000 doses of the Pfizer-BioNTech vaccine to Hong Kong.

The 585,000 doses—the first batch of the initial one million Pfizer-BioNTech vaccines to be supplied to Hong Kong—arrived on February 27 from Frankfurt, Germany, and were unloaded as priority from a freighter flight to the Cathay Pacific Cargo Terminal, the airline said in a release.

The remaining doses will be delivered in early March, Channel News Asia reported.

The Cathay Pacific shipments to date include the milestone import on February 19 of the first vaccines for use in Hong Kong. The one million doses of Sinovac vaccine were loaded inside six temperature-controlled containers to maintain the vaccine temperature range of 2°C to 8°C, and were carried in the bellyhold of an Airbus A330 operating a scheduled passenger flight.

On the same flight, there were 200,000 doses of the Sinovac vaccine destined for Mexico. The single container was towed to the Cathay Pacific Cargo Terminal in a thermal dolly and transferred to a cool room set at 15°C to 25°C, where it was recharged ahead of its midnight flight to Mexico City via Anchorage on a Boeing 747-8F freighter.

Another shipment of 800,000 doses to Mexico will follow this week. Cathay Pacific had previously carried a CanSinoBIO vaccine shipment via Beijing and Hong Kong to Mexico earlier in February using the same equipment and schedule. The airline has already also transported a Pfizer-BioNTech shipment to Penang, Malaysia on one of its freighters.

To increase links with the European vaccine production hub, Cathay Pacific Cargo is adding a further two Boeing 777 cargo-only flights to operate on the pharma corridor between the airport communities of Brussels and Hong Kong each week, Cathay said.

Meanwhile, the Cathay Pacific Cargo Terminal is being expanded to offer more temperature-controlled capacity. It can currently temporarily hold and transit 6.6 million doses of vaccine a day. This will be increased to around 8 million doses a day by the end of the year. It was designed for an annual air cargo throughput capacity of 2.6 million tonnes. Dedicated handling procedures are set up for specific temperature control requirements for each vaccine manufacturer.