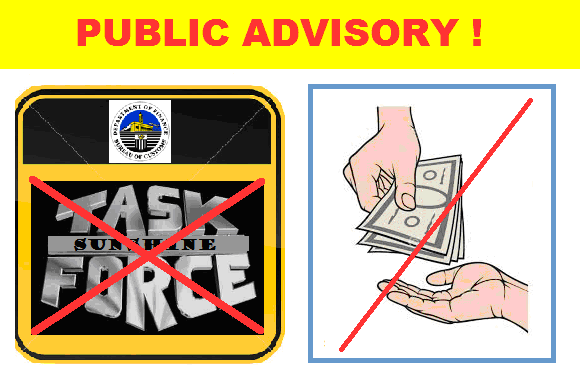 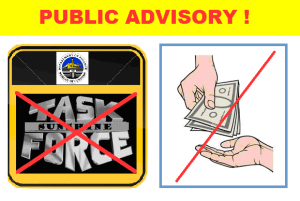 The Philippine Bureau of Customs (BOC) is dissuading the public from transacting with persons pretending to be connected with the agency through the so-called “Task Force Sunshine” or the Office of the Commissioner (OCOM).

BOC, in a statement, said it has received an anonymous report that there are people going about recruiting unsuspecting individuals to take part in forming and operating the agency’s supposed Task Force Sunshine.

“We don’t have (a) Task Force Sunshine here at the Bureau of Customs,” Customs commissioner Alberto Lina clarified.

Moreover, he cautions stakeholders against dealing with those who introduce themselves as representatives of OCOM and ask for “protection money” or “facilitation fees” from them. These people, BOC said, claim to have the power to protect and facilitate shipments once you pay them a specified amount.

“The Commissioner strongly denies any of these fraudulent claims. The OCOM or any of its staff does not deal in any sort of collection or any similar illegal acts,” BOC said.

Last November 26, Lina signed a memorandum informing BOC officials and employees that “certain unscrupulous people may have been using the name of the Commissioner of Customs to extort money or gain favors from those having interests in matters pending with or involving this Bureau and in the facilitation thereof to cause disinformation, nuisance or disruption in the rendition of business in this Bureau in its normal and regular course.”

“Such acts are not authorized, tolerated or countenanced by the undersigned (Lina) and should be reported to his office for appropriate legal action,” Lina added.

BOC advises stakeholders to report such cases to its public assistance and complaints desk.

“The Bureau of Customs is hoping for your full cooperation in putting these kinds of fraudulent transactions to a stop,” BOC said.