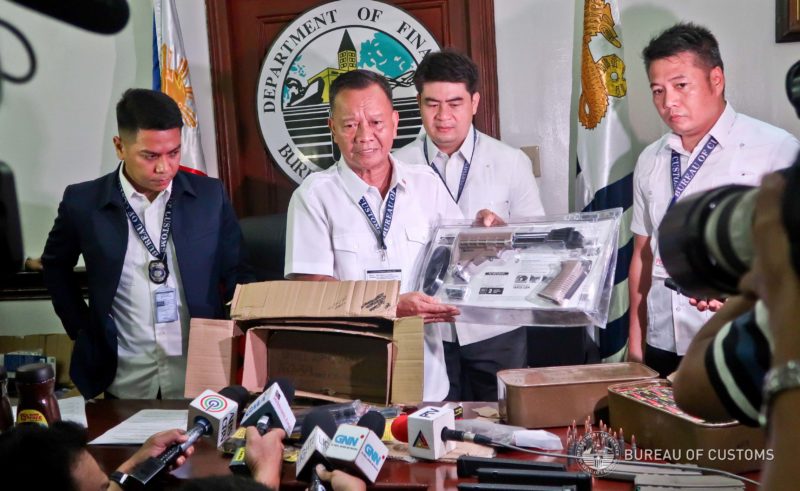 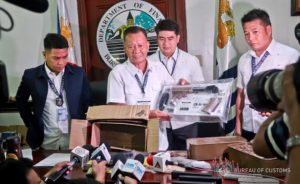 The Bureau of Customs (BOC) has nabbed two individuals suspected of smuggling into the Philippines some P5.5 million worth of regulated firearms and gun accessories concealed in six balikbayan (personal effects) boxes.

In a press briefing on September 24, BOC Enforcement and Security Service director Yogi Filemon Ruiz said the two suspects were arrested on September 22 in Zambales after they received the boxes in a controlled delivery operation conducted by the customs agency together with the Philippine National Police and the shipment’s deconsolidator.

BOC discovered the shipment after getting a tip from a reliable source that balikbayan boxes declared as personal effects that arrived in May 2018 were used as a conduit to smuggle firearms into the country.

BOC Port of Manila district collector Atty. Erastus Sandino Austria issued a warrant of seizure and detention on the shipment, which x-ray inspection confirmed to contain firearms and gun accessories. Customs Commissioner Isidro Lapeña, meanwhile, gave authority to conduct the controlled delivery to catch the smuggler of the shipments.

Arrested during the operation were 54-year old Vicente P. Hilario of San Isidro, San Marcelino, Zambales and 69-year old Jun B. Navarro of Sta. Maria, Castillejos, Zambales, who received the packages on behalf of a certain Gregorio Dela Cruz, the recorded consignee of the balikbayan shipments. The boxes were sent by a certain Anselmo Dela Cruz of 1899 Fleming Ave., San Jose, California.

Ruiz said Hilario and Navarro denied any knowledge of the concealed firearms and gun accessories, and pointed Dela Cruz as “the final recipient of the balikbayan boxes.” As of press time, ESS said Dela Cruz was still at large.

Lapeña, during the press briefing, said that based on reports received by PNP, the seized gun accessories could be intended for insurgency activities.

The suspects will be facing charges for violating Section 119 (Restricted Importation, and Exportation), Section 1400 (Misdeclaration, Misclassification, Undervaluation in Goods Declaration), Section 1113 (Property Subject to Seizure and Forfeiture) of the Customs Modernization and Tariff Act in relation to Republic Act No. 10591 or the Comprehensive Firearms and Ammunition Regulation Act.

Lapeña warned unscrupulous individuals who are trying to bring in smuggled goods and contrabands through balikbayan boxes to stop their operations.

“We are closely coordinating with deconsolidators and freight forwarders and we are upgrading our x-ray capabilities. These can deter the entry of illegal goods in the country,” he said.