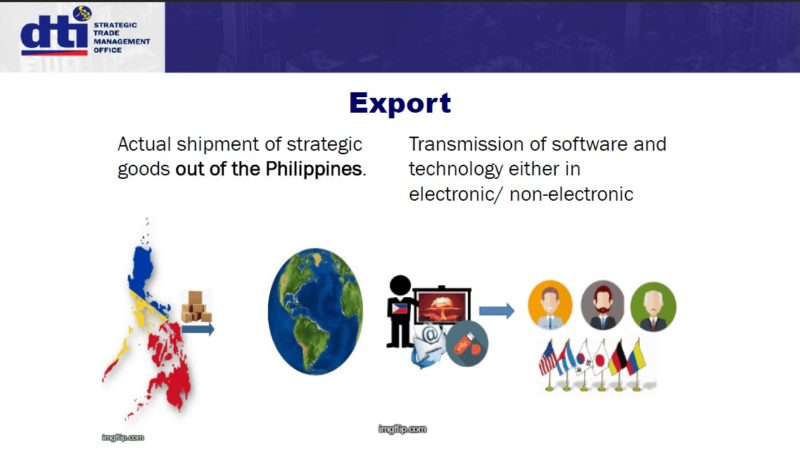 In the meantime STMO, an attached office of the Department of Trade and Industry, is still accepting applications for registration to export such goods, according to STMO Policy and Enterprise Relations Division office-in-charge Justin Herrera at a recent webinar hosted by Thomson Reuters, AC Trade Advisory and PortCalls.

A registration is required before one can apply for an authority to export strategic goods under Republic Act (R.A.) No. 10697 (An Act Preventing the Proliferation of Weapons of Mass Destruction [WMD] by Managing the Trade in Strategic Goods, the Provision of Related Service, and for Other Purposes), or the Strategic Trade Management Act (STMA). R.A. 10697 was signed in 2016 to comply with United Nations (UN) Security Council Resolution No. 1540. Its implementing rules and regulations was signed only in September 2018.

The UN resolution “imposes binding obligations on all states to adopt legislation to prevent the proliferation of nuclear, chemical and biological weapons, and their means of delivery, and establish appropriate domestic controls over related materials to prevent their illicit trafficking.”

Strategic goods are products that, due to security reasons or international agreements, are considered to be of such military importance that their export is either subject to specific conditions or prohibited altogether.

RA 10697 aims to regulate the export, import, transit and transshipment, reexport and reassignment of strategic goods, software and technology and the provision of related services to prevent WMD from proliferating.

STMO serves as the executive and technical agency of the government in establishing the systems for managing the trade of strategic goods pursuant to STMA.

STMO is enforcing phased implementation of the STMA, starting with the exports sector, according to Herrera.

Exports under the STMA cover actual shipment of strategic goods out of the Philippines as well as the transmission of software and technology either via electronic/non-electronic.

STMO earlier said it is focused more on exports of strategic goods than imports, as the latter is already regulated by other government agencies such as the Philippine Drug Enforcement Agency and Philippine National Police-Firearms and Explosives Division.

For this year, Herrera said STMO will work on strengthening inter-agency protocols and the creation of inter-agency sub-committees on Technical Reach Back, Risk Assessment, Enforcement, as well as the Technical Working Group on Trade Facilitation.

The office will also establish a technical advisory committee composed of industry representatives to assist in the implementation of the STMA.

Further, STMO is developing an IT infrastructure for registration and license application, among others.

Under the STMA’s IRR, any person who engages or intends to engage in the export, import, and re-export of strategic goods, or provides related services such as brokering, financing, transporting, or giving technical assistance must register directly with STMO prior to applying for an authorization or a governmental end-use assurance.

Under the National Strategic Goods List, which is a list of strategic goods that need authorization, are three annexes: military goods, dual-use goods, and nationally controlled goods.

Military goods refer to goods, software, and technology that are specifically designed, developed, configured, adapted, or modified for military end-use.

Dual-use goods refer to items, software, and technology which are intended for both civil and military end-use, or are used to develop, produce, handle, operate, maintain, store, detect, identify, or disseminate WMD or their means of delivery.

Nationally controlled goods, on the other hand, refer to strategic goods placed under unilateral controls for reasons of national security, foreign policy, antiterrorism, crime control, and public safety. STMO has no goods under this category yet. – Roumina Pablo