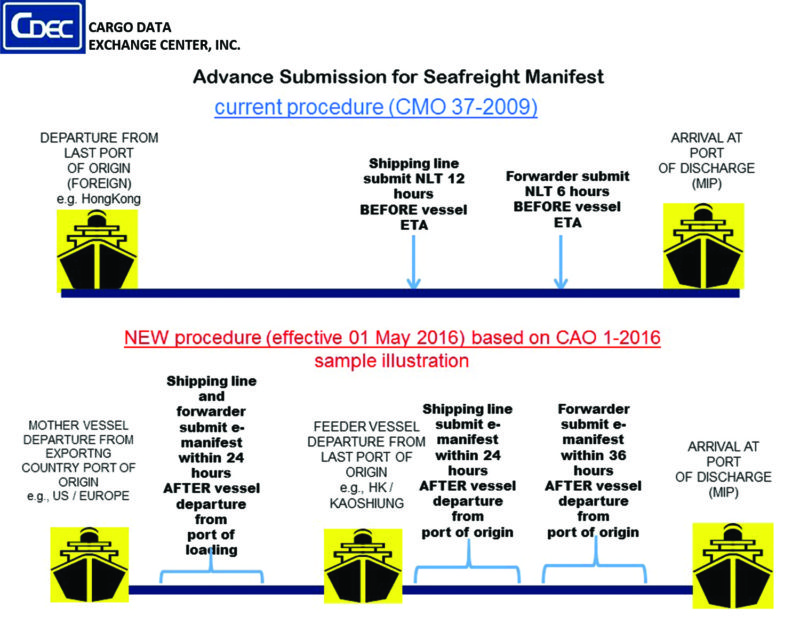 The BOC Commissioner announced during several public events that target effectivity date is 1 May 2016.

Some stakeholders refer to CAO 1-2016 as the Philippine customs version of the 24-hour advance manifest rule already being implemented by the US, Japan, China and other customs authorities.

Insofar as timing and submission cut-off times are concerned, this observation is true but there are key mandatory requirements implemented by abovementioned customs authorities that are not part of CAO 1-2016 (e.g., “Load” and “No Load” instructions.)

If I may highlight, the earlier draft version of this new CAO actually required the inclusion of commercial value, HS commodity code and dangerous cargo code as mandatory data elements for each bill of lading submission. 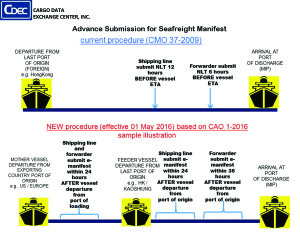 The Association of International Shipping Lines (AISL), through General Manager Atty Max Cruz, exerted all efforts and made representations with the BOC Commissioner regarding the non-availability of these data elements in all shipping line systems and therefore should not be made mandatory.

The comprehensive implementing guidelines for CAO 1-2016 have not yet been issued. (Based on initial pronouncements by Customs Commissioner Alberto Lina, an IRR will not be issued. – ed) In its absence, I will enumerate the initial list of issues and concerns that shipping lines, NVOCCs and forwarders wish the BOC to clarify and resolve:

As added reference, refer to infographic that illustrates new submission cut-off times compared to the current procedure under CMO 37-2009.

Leo V. Morada is a subject expert on IT applications in Philippine port operations with more than 30 years’ senior IT management experience implementing technology solutions in port operations, electronic transactions with customs & port authority, and air/sea port community system applications.  He is Director of Cargo Data Exchange Center, Inc, a customs-accredited Value Added Service Provider.  He may be contacted at lmorada3f1@yahoo.com.

IATA: e-AWB to become default contract of carriage by Jan 2019