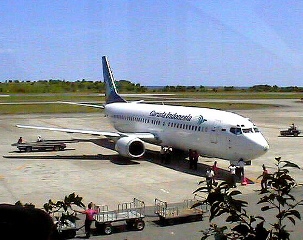 “The potential for aviation in Indonesia is enormous,” said Tony Tyler, IATA’s director general and CEO. “Its location at the heart of southeast Asia gives this market tremendous potential. As the Association of Southeast Asian Nations (ASEAN) moves forward with liberalization, it is important that Indonesia is well-prepared with a safe industry operating on global standard infrastructure.”

IATA emphasized the need to attend to safety oversight, particularly as the industry is rapidly developing. Between 2005 and 2010, Indonesia recorded a total of 33 accidents.

“Indonesia is 1.4% of global traffic but accounted for 4% of all accidents in 2010. Every accident is a reminder of the need to improve. Many efforts have been made in recent years to improve Indonesia’s safety record. An indication of the success of these efforts is seen in the removal of five Indonesian carriers from Europe’s list of banned airlines,” said Tyler.

He added that a coordinated initiative by all stakeholders will solve the safety issue and restore confidence in all of Indonesia’s airlines.

Tyler, who visited Jakarta recently, encouraged the country to mandate the IATA Operational Safety Audit (IOSA) for all Indonesian carriers and the IATA Safety Audit for Ground Operations (ISAGO) at Indonesian airports to manage safety on the ground better.

IOSA is the highest global standard for airline operational safety management. Countries that mandate IOSA include Brazil, Mexico, Chile, Turkey, Lebanon, and Bahrain. There are 372 airlines on the IOSA registry and Garuda is the only Indonesian airline on it.

The right infrastructure to accommodate growth is critical—both on the ground and in the air, IATA said.

Insufficient air traffic management is also a potential bottleneck to growth. Full implementation by Indonesia of IATA’s technical assistance for effective use of Jakarta airspace and the Automatic Dependent Surveillance-Broadcast technology to manage overflight is “critical to ensuring that the growing traffic volumes to Indonesia are managed safely and efficiently,” said Tyler.