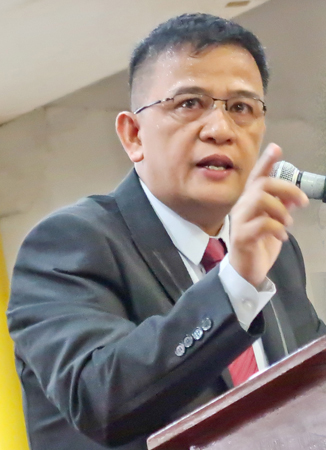 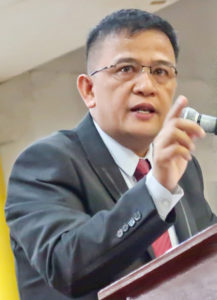 President Rodrigo Duterte “expressed full confidence” in Customs Commissioner Nicanor Faeldon, amid the Bureau of Customs (BOC) being questioned by Congress over the P6.4-billion worth of methamphetamine hydrochloride (shabu) shipment from China that slipped through the agency last May.

“The Chief Executive has expressed his full confidence in Faeldon and told him to focus on serving the country,” Finance Secretary Carlos Dominguez III said in a statement on Tuesday. BOC is an attached agency of the Department of Finance.

On Tuesday Duterte met with Faeldon and Dominguez in Malacañang, following the hearing conducted by the House Committee on Public Order and Illegal Drugs.

BOC on May 25 seized 604 kilograms of shabu worth P6.4 billion in two separate operations conducted in Valenzuela City. The shipment arrived in the country from China on May 17 and was released from a Manila port on May 23.

In a press conference on July 31, Faeldon said he requested Duterte and the World Customs Organization (WCO) to conduct investigations into the release of the illegal drugs from BOC custody.

He said the agency is also seeking a probe into the risk management system that allowed clearance of the shipment, and then its later seizure by government operatives.

Faeldon said he has submitted a letter to Duterte requesting a “full-blown investigation” so no stone is left unturned. He said the request is not a reflection of distrust in ongoing investigations by the National Bureau of Investigation (NBI) and Philippine Drug Enforcement Agency (PDEA).

The customs chief explained he is requesting an independent body because BOC, PDEA, and NBI are also part of the investigation and had roles in seizure of the illegal shipment.

The composition of the independent body will depend on Duterte, Faeldon noted.

Congress is conducting its own inquiry in aid of legislation.

Faeldon also requested the WCO to investigate BOC’s risk management system to determine failures made in handling the case that resulted in the illegal shipment’s release from customs custody. He said the WCO can better explain to the public the selectivity system, since it’s a “peculiar system for customs management.”

According to BOC, Atty. Larribert Hilario, head of its Risk Management Office which handles the agency’s selectivity system for shipments, failed to input the necessary data in order for the shipment’s importer, EMT Trading, to be directed to the red lane. Since it is a new importer and is registered under sole proprietorship, EMT Trading shipments should ordinarily fall under the red lane.

High-risk shipments go through the red lane and are subject to both documentary review and physical inspection prior to their release.

But most of EMT’s shipments since it started in March this year until May have been using the green lane, some the yellow lane, and with only a few the red lane.

The particular shipment containing the shabu seized in Valenzuela was directed to the green lane.

Faeldon noted that although BOC’s selectivity system follows WCO requirements, it is unable to “detect lies” encoded in it.

Last month, the customs chief said the Washington-based lender has earmarked US$100 million for the new system, which is targeted to be rolled out after two years.

During the Senate inquiry on July 31, Faeldon said he would take full responsibility for the released shabu shipment and “all those apprehended and (those we) failed to apprehend,” as well as “all the actions and inactions of all employees of the bureau.”

During the press conference, the customs chief said they welcome the inquiries being done on the seized shabu shipment as they also want to know the truth and those possibly involved in its release.

He added he welcomes Hilario’s impending testimony in the Lower House, adding “we expect that he will be telling the truth, the whole truth.”

Hilario, who Faeldon said he suspended verbally and who could not be contacted by BOC to attend hearings on the case, is now under protective custody of the Lower House to testify on the hearing.

According to BOC’s own investigation, Hilario committed “neglect of duty” for not encoding the needed data for EMT, which resulted in the release of the illegal shipment.

Gambala, during the press conference, also said no data input has been made on the agency’s risk management system since October, and that since then new importers were possibly not directed to the red lane.

Only Hilario has access to the system, BOC noted.

Aside from Hilario, customs broker and trucker Mark Ruben Taguba, who was likewise called to testify in the Senate hearing, has been placed under protective custody after requesting for an executive session with senators of the Blue Ribbon Committee.

Committee chairman Senator Richard Gordon said it is necessary to provide security to Taguba, who is a “willing witness” after he identified the names of officials allegedly involved in the shabu shipment.

During the Senate hearing, Taguba named Taiwanese national Richard Tan or Richard Chen as the owner of the forwarding company in China that sent the shabu shipment. Taguba said Tan (or Chen) would know the shipment’s recipient in the Philippines.

Taguba, as well as EMT Trading owner Eirene Mae Tatad, claimed not to have known that the shipment contained illegal drugs and to have also been surprised when news broke out that a raid in Valenzuela, where they had discharged the shipment, yielded illegal substances.

Taguba and Tatad both denied direct dealings with Tan, saying they communicated only through a middleman identified as a certain Kenneth Dong. According to the Blue Ribbon committee, Dong left the country on July 28 for Chengdu, China.

Gordon set the next committee hearing for August 8. Another Lower House inquiry was conducted on August 1.

Meanwhile, aside from a system to replace e2m, Faeldon said BOC is procuring four new X-ray machines to replace existing ones that cannot detect illegal drugs weighing less than 10 kilos. This is to beef up the agency’s border control protection, since it currently can conduct X-ray inspections on only 16% of the 10,000 shipments handled daily on average by the two Manila ports. Manila ports handle majority of the country’s cargo volume.

This means, Faeldon said, that 84% of the 10,000 shipments could possibly be holding undetected contraband. The customs chief said that since they were procured in 2008 from China, BOC’s X-ray machines have not been able to detect one illegal drug in a shipment. He said BOC’s seizures were usually carried out based on intelligence information.

Faeldon said the Department of Budget and Management has already approved the procurement of four new X-ray machines capable of scanning containers at a speed of 40 kilometers per hour. BOC is finalizing the terms of reference to start the bidding, and is targeting to acquire the new equipment after 10 months.

The new X-ray machines will be able to inspect 50% of the 10,000 daily shipments, Faeldon said. Port of Manila and Manila International Container Port will each have two of the machines, and the target is to procure six more by next year, so that each port has five X-ray machines in all and can inspect 100% of shipments.

Management System Information and Technology Group deputy commissioner Gerardo Gambala assured that the X-ray inspection will not cause delays since containers will only be passing through the machines for a minute. He noted, however, that there should be space inside the port for such inspection.

Aside from X-ray machines at the seaports, the 18 carousels at the NAIA airport will also be equipped with X-ray function, which means all carousels will be able to check the baggage of passengers. – Roumina Pablo