Box rates to remain volatile as industry wallows in down cycle 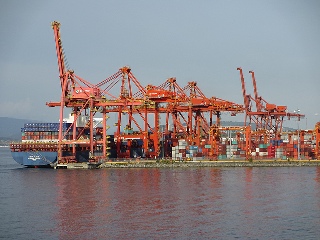 The container shipping industry remains in an extended down cycle, as the constant delivery of new ships widens the imbalance between demand and supply and prevents freight rates from stabilizing, according to a Drewry Maritime Research report.

“The industry is stuck in a vicious cycle—although new ships may give carriers lower slot costs, the supply/demand dynamics are out of kilter and freight rates remain very volatile,” said Drewry’s “1Q14 Container Forecaster.”

It added that with no real effort to curb capacity, the industry will have no opportunity to “recover and draw breath” until 2016, as it pegs global supply growth at 5.7 percent for 2014 and 6.7 percent next year. Global demand growth this year is forecast at just over 4 percent.

The order book’s momentum has not stopped, with the emphasis on the delivery of 115 more ultra-large container vessels and a large number of ships in the 8,000- to 10,000-TEU category, said Drewry.

“NYK will confirm an order soon and Cosco has now re-entered the fray. CMA CGM’s decision to upgrade some of its ships to the 18,000-TEU level may also instigate another injection of capacity,” it added.

“Although scrapping rates are at record levels, the delivery profile in the next 24 months will continue to cause damage and carriers will have little if any long-term success with their constant general rate increase initiatives. On the contracting side, we also hear anecdotally that many contracts in the core east-west trades have been signed at the same level as in 2013 or in many cases, significantly lower.”

Some of these trade routes have also not lived up to expectations in cargo flows, and the sharp influx of many new ships of at least 8,000 TEUs has resulted in significant declines in freight rates, particularly on the Asia-East Coast South America trade.

Bigger ships may be delivering the lower unit costs carriers seek, but the supply/demand imbalance coupled with the desire by most operators to protect their market share is a toxic mix for overall profitability. This is why all focus is now on reducing costs and Maersk Line remains the “best in class.”

Multiple levers are being used by carriers to address the over-supply to varying degrees of success—void sailings, scrapping, idling vessels, slow steaming, and new alliances and mergers. “These alone are not enough since freight rates are increasingly being dictated by carrier behavior and psychology, rather than the fundamentals,” Drewry said.