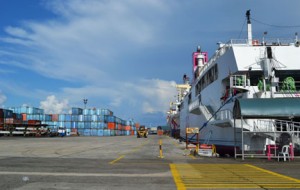 The Philippine government has issued a new measure that reinforces the country’s international commitment to fighting security threats against the maritime transportation system.

The code is a framework through which governments, shipping companies, and port authorities can cooperate to detect and deter acts that endanger the maritime transportation system.

EO 197 designates the secretary of transportation and communications (SOTC) as the authority responsible for the overall security of sea transport and maritime infrastructure in the country, and the one who will “ensure the accomplishment of the duties and responsibilities of the contracting government under the ISPS Code.”

The Philippines is a contracting party to the 1974 International Convention on the Safety of Life at Sea (SOLAS), as amended, which includes Chapter XI-2, on Special Measures to Enhance Maritime Security, that adopts the ISPS Code.

In a text message to PortCalls, SOTC Joseph Emilio Abaya said the country has “in fact been executing amendments in policies, SOPs (standard operating procedures), functions, organizational structure and (has) also installed necessary infrastructure to comply with the ISPS.

“We have been regularly audited by the US Coast Guard, thus, maritime agencies are kept on (their) toes and the EO further strengthens our compliance.”

Under EO 197, the SOTC will make sure agencies perform the necessary functions in implementing provisions of the ISPS Code.

As such, the Philippine Coast Guard (PCG) will apply control and compliance measures prescribed by the code to keep secure ships on Philippine waters or those that intend to call at any port in the country.

The Philippine Ports Authority (PPA) and other port authorities will carry out security duties at port facilities as stipulated under the ISPS Code. Together with the Bureau of Customs (BOC), the PPA will take steps to prevent tampering during cargo handling and forestall cargo not intended for carriage from being accepted and stored on board ships and within port facilities.

The Maritime Industry Authority (Marina) will secure Philippine-flagged or registered ships, while the Office for Transportation Security (OTS) will implement and maintain the National Security Program for Sea Transport and Maritime Infrastructure (NSPSTMI).

With the approval of the SOTC, the OTS will prescribe security standards for sea transport and maritime infrastructure. The agency is also required by the EO to establish performance standards and examine and audit the performance of port security personnel, equipment and facilities, as well as train staff on approved port facility security assessments and plans.

OTS has been tasked to monitor the compliance of PPA, other port authorities, PCG, Marina, other relevant government agencies, and recognized security organizations with the standards specified in the ISPS Code.

As part of their mandate, these agencies can impose sanctions for violations of prescribed security standards and the ISPS Code, as may be recommended by the OTS. The SOTC will set guidelines for imposing sanctions according to applicable laws and international agreements.

“All agencies of government, including the BOC, Bureau of Immigration, and the National Coast Watch Center, are hereby directed to assist and coordinate with the SOTC for the successful performance of functions under this EO,” Aquino said.

At the same time, the SOTC will provide the structure for the harmonious coordination of the roles and responsibilities of the OTS, PPA, other port authorities, PCG, MARINA, Philippine National Police, and other security-related agencies and organizations in implementing EO 197.

Meantime, the existing NSPSTMI is set to be updated to align with provisions of the new EO, with the new version scheduled for approval by the SOTC within 60 days of the effectivity of EO 197, which is on February 4.

The SOTC is tasked to promulgate the implementing rules and regulations of EO 197 within 30 days of its effectivity. – Roumina Pablo