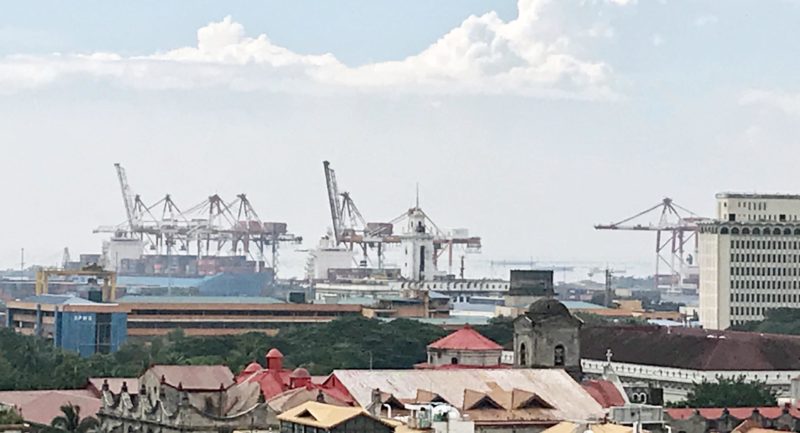 The Philippine Ports Authority (PPA) has warned of a port shutdown if cargo owners and consignees “continue to shun calls” to withdraw their overstaying cargoes, the number of which continues to grow.

PPA general manager Atty. Jay Daniel Santiago, in a statement on March 31, said that despite efforts to transfer cleared and overstaying containers from the Manila International Container Terminal (MICT) to domestic terminal Manila North Harbor, “there [is] still not enough breathing space for the Manila port terminals to operate efficiently and productively.”

Yard utilization at Manila’s international terminals—MICT and Manila South Harbor—is almost at 100% level as majority of cargoes have remained idle after implementation of the enhanced community quarantine some two weeks ago, PPA said.

As of March 27, more than 800 cleared reefer containers containing perishables like food, medicines and other essentials are still inside MICT, while more than 2,000 dry containers already cleared and ready for delivery remain inside the terminal. These numbers as of press time have further increased, PPA noted.

“Ports, specifically the Manila ports, are the lungs of the country’s commerce and trade. These lungs right now are not functioning efficiently due to congestion,” Santiago said.

“If we continue to ignore calls to withdraw even only those cleared, ready for delivery, and overstaying cargoes, these lungs are in danger of total collapse, resulting in full-blown port congestion, or worst, a shutdown, and consequently a shortage in the much needed goods and supplies which are expected to address the demands of the market,” Santiago explained.

“Again, government is appealing to the consignees, cargo owners, brokers, logistics, manufacturers and other supply chain service providers to help us address this situation by withdrawing their cargoes,” Santiago added.

“We really need to clear these cargoes to accommodate the incoming ones as most of our needs to fight this COVID-19 pandemic are in these incoming cargoes,” the PPA chief said.

In a March 27 bulletin, the IATF said the regulators–Bureau of Customs (BOC), PPA, Department of Trade and Industry (DTI), and Department of Agriculture and their attached agencies and bureaus—should issue a joint memorandum circular providing specific guidelines to ensure availability of essential goods, in particular food, medicine, and other basic commodities.

On March 30, BOC said it is processing the transfer of unclaimed containers from MICT to the container depot of Pacific Roadlink Container, Inc. (PRLI) and Manila North Harbor to unclog the congested international terminal.

PPA said that together with BOC, DTI, DA, and other agencies, they are now looking at measures to address the congestion, as directed by the IATF.

Among measures being considered are the forfeiture of overstaying cargoes in favor of government, and reducing the cargo clearing period as well as the free storage period from the current allowable time in order to force cargo owners to withdraw, or be burdened with heavy fines, penalties and storage fees.

No IATF ID yet

The Chamber of Customs Brokers, Inc. (CCBI) in a memorandum on March 30 noted that the “stringent quarantine measure by the enforcement agencies somehow limits our movements and we have not received till now the IATF ID.”

CCBI is referring to the ID that should be issued by DTI to logistics service providers in order to allow them to travel and pass checkpoints during the enhanced community quarantine period.

READ: Logistics providers among enterprises that can operate during quarantine period

Many cargo transport service providers have found it difficult, especially in the first days of the enhanced community quarantine, to operate as their trucks are being stopped at checkpoints despite an IATF order to ensure unhampered cargo movement. Employees of cargo transport service providers and customs brokers have also been unable to report for work due to travel restrictions and the suspension of operation of public transportation.

CCBI said another limiting factor is the closure of BOC’s building in MICT after an employee tested positive for coronavirus disease, disrupting BOC operations, particularly assessment.

BOC assistant commissioner and spokesperson Atty. Vincent Philip Maronilla on March 30 said they are doing their best to normalize operations within the middle of this week with the help of BOC officers at Port of Manila. BOC, meanwhile, is encouraging stakeholders to do their transactions online.

Christian Gonzalez, executive vice president of International Container Terminal Services, Inc. (ICTSI), operator of the MICT, in a March 27 letter to consignees, shippers, brokers/processors, said MICT “has come to a point where it is becoming impossible to operate in an efficient manner,” said in a March 27 letter to consignees, shippers, customs brokers, and processors, a copy of which was sent by PPA to media.

He added, “Containers are simply not being removed from the terminal. We understand that it is unfeasible for some, and many businesses have been temporarily shut down, but without the full support of everyone that is able to open, we will come to a point when efficient operations will no longer be possible.”

For the period covering March 1 to March 26, he noted that 8,201 cleared containers were sitting at the terminal, of which more than 850 TEUs are refrigerated containers.

In addition, there are 21,387 TEUs that have been discharged after March 1 but still waiting for clearance and release; over 1,400 TEUs of these are reefers.

“Those who are able to must please clear and remove your containers immediately,” appealed Gonzalez.

Those unable to take delivery at their own facilities, ICTSI offered its offsite facilities in Laguna, Bulacan and Cavite. “Special accommodations are available to anyone who utilizes these facilities,” Gonzalez said.

He also appealed to the Inter-agency Task Force for the Management of Emerging Diseases to facilitate immediate approval for transfer or condemnation, through the BOC, of more than 7,000 TEUs in MICT for more than 30 days.

“Condemn and approve the transfer of all containers (at the MICT) which were discharged in 2018 or earlier immediately bypassing the tedious condemnation and auction process. We must act on this after years of debate,” Gonzalez said.

He noted that “all cleared boxes over 30 days old should have approvals facilitated” so they can be transferred without delay to external facilities.

To address the problem, PPA in Memorandum Circular No. 11-2020, dated March 26 and effective immediately, temporarily authorized Manila North Harbor, a domestic port, to be the designated port for the transfer of overstaying foreign containers that have been cleared for delivery/withdrawal, and subject to approval of BOC for import containers.

The PPA memo said the transfer of import containers is subject to approval by the BOC.

READ: All cargoes must pass unhampered, DTI stresses in memo

Movement of all types of cargoes is allowed during the enhanced community quarantine, but issues with checkpoints in the first days of implementation have caused problems.

DTI has already reiterated a policy of unhampered movement of cargo trucks and is issuing identification cards to logistics service providers and their staff to enable them to travel and pass through checkpoints. BOC is also issuing a pass to its accredited stakeholders as well. – Roumina Pablo