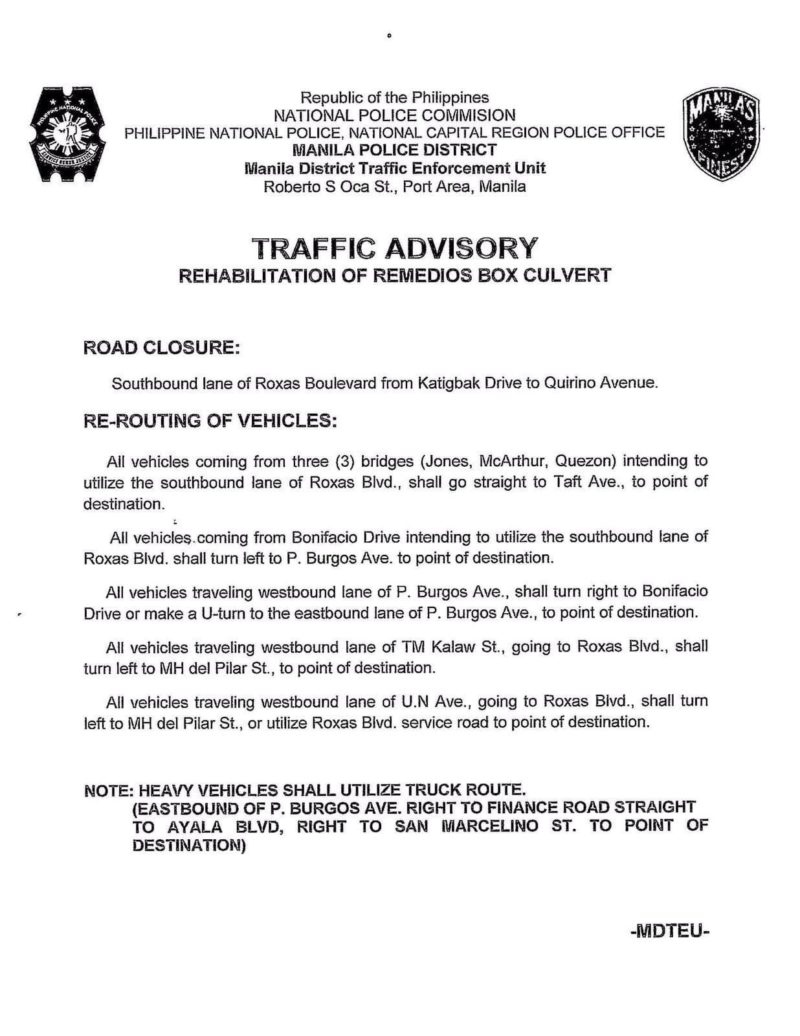 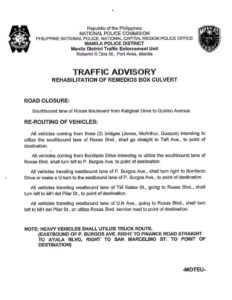 Motorists should use alternate routes as the southbound lane of Roxas Boulevard from Katigbak Drive to Quirino Avenue is closed to traffic starting May 20 due to rehabilitation of the box culvert on Remedios Street.

The Manila city government on May 19 discouraged heavy trucks from using Roxas Boulevard upon discovery of several road cracks along the major thoroughfare.

In a traffic advisory by the Manila Police District-Manila District Traffic Enforcement Unit, all vehicles coming from these three bridges—Jones,  McArthur, Quezon—intending to use the southbound lane of Roxas Boulevard should go straight to Taft Avenue to point of destination as an alternate route.

Other alternate routes include:

Manila City mayor Francisco Domagoso on May 19 assured movement of trucks will remain unhampered in the nation’s capital during the period of modified enhanced community quarantine (MECQ).

READ: No trucks will be flagged down, impounded in Manila during MECQ

Domagoso assured trucking organizations in a virtual meeting that no truck will be flagged down and impounded during the MECQ period until May 31. Trucks will also be allowed to traverse Roxas Boulevard and other truck routes even those without the Terminal Appointment Booking System (TABS), he added.

This is in accordance to the directive of the Inter-Agency Task Force for the Management of Emerging Infectious Diseases that movement of all types cargoes by land, air, or sea should remain unhampered during the quarantine period.

While elbow room was given for truckers operating in the city, Domagoso maintained that laws against road violations such as reckless driving will be strictly enforced.