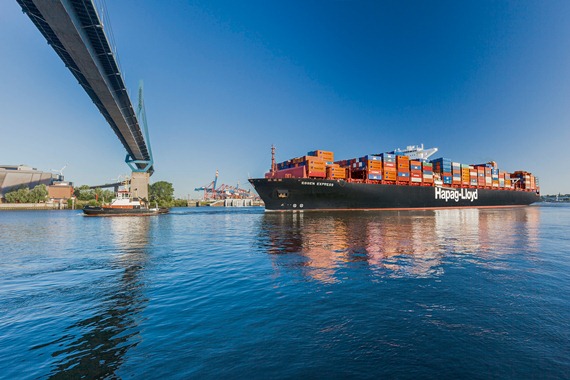 German ocean carrier Hapag-Lloyd said it expects the current supply chain bottlenecks to last until at least early next year even as it announced “extraordinary financial results” for the first half of this year, mainly the result of soaring freight rates.

Hapag-Lloyd concluded the first half year of 2021 with an EBITDA of EUR3.5 billion (US$4.2 billion), up from EUR1.2 billion in the same period a year ago.

“In a market with very strong demand for container transports, we have benefitted from significantly improved freight rates and look back on a very good first half year,” said Rolf Habben Jansen, CEO of Hapag-Lloyd.

“The freight rate development was the result of high demand combined with scarce transport capacities and severe infrastructural bottlenecks,” noted the company.

Transport volumes were up 4% in the first semester of this year compared to the previous year, as the second quarter of 2020 was impacted by a slump in demand due to the COVID-19 pandemic.

In addition, a roughly 6% lower average bunker consumption price had a positive impact on earnings.

To beef up capacity, Hapag-Lloyd ordered six large container ships in December 2020 and in June this year, which will only arrive between the end of 2022 and into 2024.

It also ordered 150,000 new containers in April this year and 60,000 more containers the next month to address the box shortage. Jansen said the boxes have started to arrive and more are still due to arrive in the fourth quarter.

Hapag-Lloyd said that while demand remains high in the current congested market environment, it is leading to a shortage of available weekly transportation capacity.

“We are naturally pleased by this extraordinary financial result. But the bottlenecks in the supply chains continue to cause enormous strains and inefficiencies for all market participants and we have to do our utmost to resolve them jointly as soon as possible,” said Jansen.

“Looking at the market environment today, we however do not believe that the situation will return to normal any time soon – despite all the efforts made and the additional container box capacity that is being injected. We currently expect the market situation only to ease in the first quarter of 2022 at the earliest.”