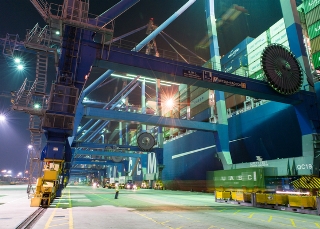 Profit after tax of Malaysia’s Westports Holdings Bhd surged 33% to MYR141 million (US$42.15 million) in the third quarter of 2014 year-on-year.

The company also posted another record high in its container volume by handling 739,000 twenty-foot-equivalent units (TEUs) in August 2014, erasing its last record of 719,000 TEUs in May, the company said in a statement today.

For the same period, its operational revenue improved 12.7% to MYR1.117 billion versus the year-ago figure, the statement added. Container throughput recorded a 12% surge to 6.18 million TEUs.

A new terminal will rise

The company also disclosed plans to invest MYR1 billion over the next three years to build a new container terminal.

For the first year of the container terminal 8 (CT8) expansion plan set to begin next year, the company has allocated MYR400 million in capital expenditure.

“The capacity expansion of CT8 is timely and well-positioned to capitalize on the rising container throughput, and we are optimistic that this strong momentum will sustain, moving forward, especially with the recent formation of the Ocean Three Alliance,” said group chief executive officer Ruben Emir Gnanalingam in a statement.

The development project will be implemented in two phases. The first stage is to start in early 2015 with the construction of a 300-meter wharf and supporting port equipment and facilities, with a target completion date of 2016. The final phase is scheduled to be finished by the middle of 2017.

Once the new terminal is fully operational, the container-handling capacity of Westports is expected to increase from the present 11 million TEUs to 13.8 million TEUs.