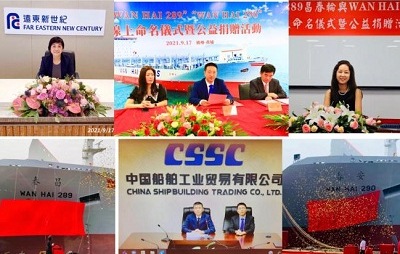 Named virtually last September 17 were WAN HAI 289 and WAN HAI 290, the sixth and seventh vessels in the series being built by China Shipbuilding Trading Co. and Guangzhou Wenchong Shipyard Co., said the carrier, which specializes container shipping services within Asia.

The series is designed with energy efficiency and environmentally friendly aspect taken into account. Moreover, all the ships delivered are certified with “Smart Ship” notations by international well-known classification societies.

WAN HAI 289 will be delivered on September 30 at Guangzhou Wenchong Shipyard and will be joining the Wan Hai Lines’ Japan Kansai-Vietnam service.

It also confirmed that same month an order of twelve 3,055-TEU container vessels with Nihon Shipyard Co Ltd. / Japan Marine United Corp as part of the company’s fleet improvement plan. These new vessels will start taking delivery at the end of July 2023.