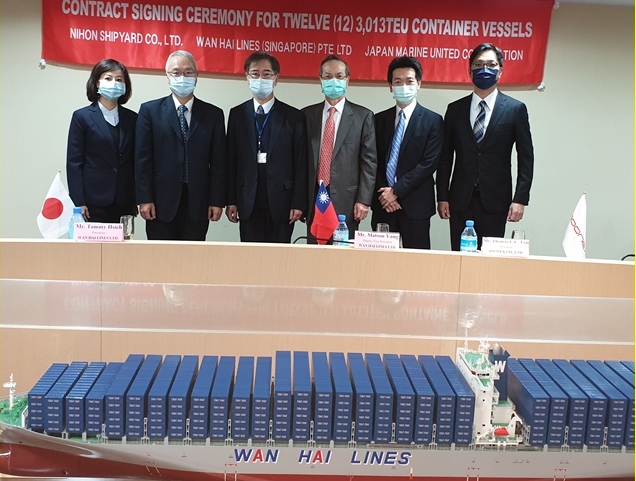 Taiwan-based Wan Hai Lines announced it has placed an order for 12 newbuild ships of 3,013 TEUs (twenty-foot equivalent units) in capacity as part of its fleet renewal plan.

The order comes after the carrier’s last order of eight container ships from Japan Marine United Corporation (JMU) in November 2018.

The new order was placed with JMU/Nihon Shipyard Co Ltd. on January 27, 2021. The new series of vessels is expected to be delivered successively from end-October 2022.

All twelve ships will be powered by more environmentally friendly main engines and generators, both of which meet International Maritime Organization Tier III standards in terms of nitrogen oxide emission to reduce air pollution, the carrier said in a release.

In addition, the vessels will be outfitted with alternate maritime power systems so as to enable shore power connection to significantly reduce air pollution when the vessels are berthed.

Early last month, Wan Hai also announced the launch of a new weekly service between East China, Taiwan and Ho Chi Minh. The CV7 Express Service will be operated by two container vessels with a capacity of 650 TEUs.

Wan Hai Lines said the new service will expand further its intra-Asian network and has a port rotation of Shanghai-Kaohsiung-Ho Chi Minh-Shanghai.

The first voyage was scheduled from Shanghai on January 12, 2021.