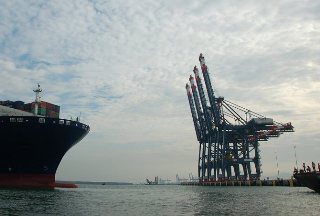 APM Terminals, which holds a 49 percent stake in the Cai Mep International Terminal in the Ba Ria-Vung Tau province of southeast Vietnam, has proposed to connect three terminals at the port complex under one common management.

Pedersen said the port alliance will lead to the development of the Cai Mep-Thi Vai complex into a top transshipment port in Vietnam, according to a report published by the Vietnam Seaports Association.

Thang has reportedly instructed the Vietnam Maritime Administration to study the proposal, which is seen to enhance the competitiveness of the terminals.

The Cai Mep-Thi Vai port complex has been eclipsed by the terminals in neighboring Ho Chi Minh City, leading to cargo declines and financial losses. According to a recent report of the Ba Ria-Vung Tau Provincial People’s Committee, six container terminals at the port complex are operating at just around 15 percent of capacity.

The terminals are struggling with such low demand that they have resorted to price undercutting, further driving profitability down, reports further said.