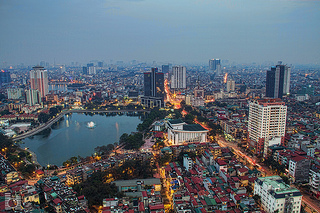 The government of Vietnam has unveiled an ambitious development plan for its transport sector that covers the land, water, and air transport infrastructure systems.

The restructuring project to improve the transport sector by 2020 was approved by Prime Minister Nguyen Tan Dung on July 22, according to local reports.

Under the program, water transportation-related enhancements include the continued development of national and international seaports in key economic zones, particularly to ensure the full use of the Lach Huyen and Cai Mep-Thi Vai seaports.

Efforts will likewise be poured into upgrading the north-south railway system and building high-speed railways to connect various areas such as Lao Cai and Hanoi, and Hanoi and Hai Phong, as well as to link up seaports.

By 2020, river lines connecting the Mekong Delta with Ho Chi Minh City, as well as those along Tien Giang, Hau Giang, Red, and Thai Binh rivers will have been boosted.

On land improvements, the administration will complete the construction of 2,000 kilometers of highways by 2020, and the National Highway 1A linking Hanoi in the north and Can Tho city in the south will undergo a makeover and expansion before 2016.

On aviation services, budget airlines will be encouraged to expand through link-ups with regional and international partners. The industry will also be pushed to extend its share beyond traditional markets in Southeast Asia, Northeast Asia, China, and Oceania and establish more destinations to Europe, North America, Latin America, and Africa.

International airports will be undergoing modernization, and flag carrier Vietnam Airlines will be equitized this year.

In related news, some Vietnamese businesses are protesting the tight checks being imposed on trucks and their loading capacity at registration centers in recent months, saying it is causing delays in the transport of their clients’ goods.

They said it takes them more than a week to complete procedures, prompting some owners to remove the extended parts of their vehicles to avoid failing registration procedures that require them to remodel the trunk of their trucks.

Others have resorted to buying more trucks to transport the same volume of merchandise, but buyers have to wait four to five months to take delivery of their new vehicles.

The stricter controls arise from road and bridge conditions in the country having usually lower load-holding capacities than those of trucks. This month, the government will implement more measures to control vehicle loads even as it seeks to help transport firms cope with the new regulations.