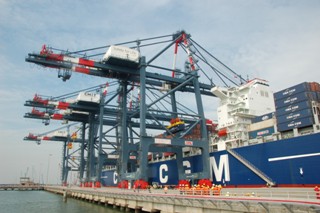 APMT, one of the three companies jointly managing the facility, said CMIT handled 2,100 containers for the 9,038-TEU Mette Maersk during the vessel’s 11-hour, 30-minute stay at the terminal.

“This is certainly the first time CMIT has crossed the important benchmark of 40 crane moves per hour, and we believe we are the first container terminal in Vietnam to have done so,” said Steen Davidsen, CMIT general director. “We also believe our berth productivity of 183 moves per hour using just 5 Ship-To-Shore cranes sets a new benchmark for Vietnam.”

CMIT measures berth productivity based on the total time the vessel is available for work on the berth, starting from the time the gangway is secured and ending upon time of vessel sailing, or half an hour after operational completion should the vessel not sail immediately.

This means that time is not deducted from this berth productivity calculation, thus  accurately reflecting the time the vessel spends working at the terminal.

Since handling its first vessel on March 30, 2011, CMIT has welcomed 151 vessel calls, handling over 351,000 TEUs of export and import containers to and from Europe, North America, and Asia.