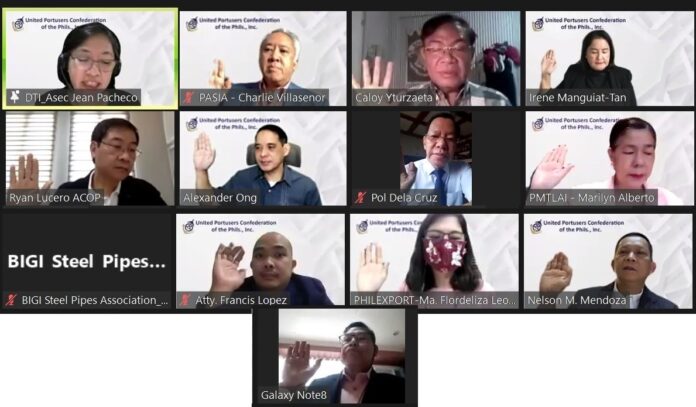 The United Portusers Confederation of the Philippines, Inc. (UPC) has officially inducted its new set of officers and board of trustees for the term 2021 to 2023.

The new officers, led by Nelson Mendoza as president and Atty. Gedeon Albao as chairman, were inducted by trade and industry assistant secretary Mary Jean Pacheco on October 13 at a virtual ceremony.

All officers are also members of the board of trustees, together with Ruperto Bayocot, Charlie Villaseñor, Atty. Leonides David, Carlos Yturzaeta, and Leopoldo Dela Cruz.

During the induction, Mendoza said UPC for the last eight years has been in “the forefront in terms of engagement and cooperation in resolving our industry’s multitude of concerns and challenges,” consistent with its mission to be the voice and “champion of mutual interest” of the associations of port users and external stakeholders.

He said UPC will remain committed to its mission and continue to find areas of collaboration with government agencies and stakeholders.

Mendoza also said he hopes for the passage of bills filed at the Lower House aimed at regulating foreign shipping lines’ local charges and creating a Philippine Shippers’ Act, noting that the bills are supported by various business and industry associations.

UPC is a non-stock corporation organized to promote and advance the interest of all organizations involved in the use of the country’s sea and airports through proper coordination with appropriate government agencies.

The group seeks to represent member organizations within the industry and before government agencies, both in the Philippines and overseas.

It is composed of industry associations representing the transport and logistics industry, including warehouse operators, forwarders, customs professionals, exporters, importers, and manufacturers.