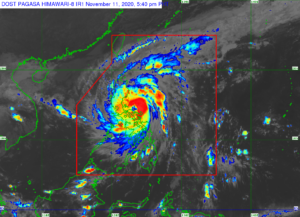 Vessel operations at several ports, including the Manila South Harbor, Batangas and the Bicol region, were suspended on Nov 11 due to typhoon Ulysses.

Moreover, 76 vessels and 23 motorbancas are taking shelter as a precautionary measure, PCG said in an advisory.

Ursabia instructed Coast Guard districts in the Bicol region and NCR to ensure completeness and preparedness of their deployable response groups and quick response teams.

In its latest weather bulletin, the Philippine Atmospheric, Geophysical, and Astronomical Services Administration (PAG-ASA) said destructive winds and intense with at times torrential rainfall will be experienced over Camarines Sur and Camarines Norte until tonight (November 11) and over Aurora and the northern portion of Quezon tonight through the early morning of November 12.

The center of typhoon Ulysses is forecast to make landfall or close approach in the vicinity of Calaguas Islands tonight, then over Polillo Islands and mainland Quezon between tonight and tomorrow early morning. Afterwards, the typhoon will cross Central Luzon and emerge over the western seaboard of Zambales tomorrow morning.

Ulysses comes a little over a week after super typhoon Rolly devastated many parts of the Bicol region.