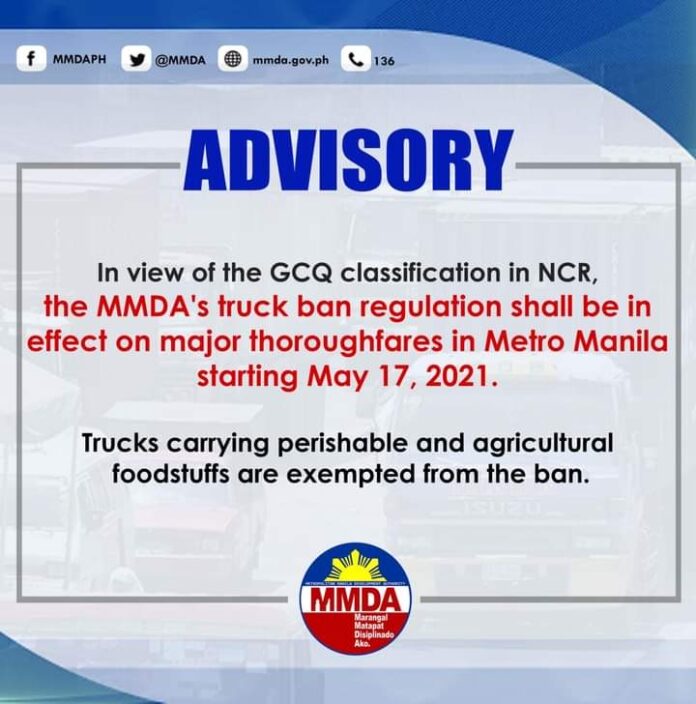 The truck ban policy on major thoroughfares in Metro Manila will be reimposed starting May 17, 2021, according to the Metropolitan Manila Development Authority (MMDA).

This, after the National Capital Region’s quarantine status was eased to general community quarantine (GCQ) with heightened restrictions on starting May 15 to 31. Metro Manila is also referred to as NCR.

Under the MMDA’s existing truck ban policy, trucks are banned from traversing along major thoroughfares in Metro Manila managed by the MMDA, from 6 am to 10 am and 5 pm to 10 pm, Monday to Saturday.

A total truck ban is enforced along EDSA, from Magallanes Interchange in Makati City to North Avenue in Quezon City, 24 hours from Monday to Sunday.

Trucks carrying perishable and agricultural foodstuffs are exempt from the ban.

The truck ban was suspended in March last year to ensure the unhampered movement of goods during the COVID-19 pandemic. It was reinstated in December last year during the holiday season, and was reimposed again late March this year when Metro Manila was placed under enhanced community quarantine.