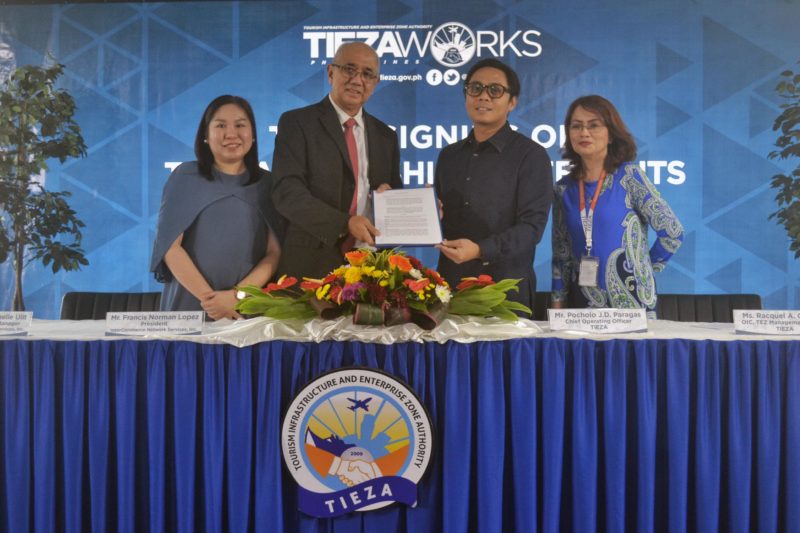 TIEZA chief operating officer Pocholo Paragas, in an interview with PortCalls on the sidelines of the service agreement signing ceremony with INS on July 26, said automating the import permit process will enhance the agency’s efficiency, one of its goals, as it noted that at present, “government [is] less felt by the people.”

He added that automation will also make processes transparent in compliance with the government’s Freedom of Information policy. He said many locators and enterprises registered with TIEZA engage in imports.

Under the agreement, INS will provide the facility for a web-based system for the filing and processing of TIEZA import permit applications. INS already provides similar value-added services to other government agencies such as the Bureau of Customs (BOC), Philippine Economic Zone Authority, Clark Development Corporation, and Bureau of Plant Industry.

INS president Francis Norman Lopez, in a separate interview with PortCalls during the event, said the system will initially cover the importation of capital equipment, unregulated items, and regulated items controlled by TIEZA.

He said that once TIEZA enterprises have registered with the system, they can start applying for import permits online.

Lopez said INS will coordinate with the BOC so the electronic copy of the import permit generated by the TIEZA system will be recognized by Customs and accepted into the National Single Window system. TIEZA-registered enterprises are exempt from paying duties and taxes for importing goods that are actually consumed in the course of services actually rendered by or through registered enterprises within a TIEZA economic zone.

Lopez said it will take about three months to create the system.

TIEZA will not be paying for the system, but users will have to pay a certain fee for using it, similar to how it is done with other value-added service systems in other government agencies.

Lopez said that with the system, import permits can be issued much faster and more predictably than when these are processed manually. The system will also separate the approval of the import item from the actual import permit application “so if the company is just beginning to import, starting up, they know what they are going to import; [the company] can have this item pre-approved even before the cargo will be bought or ordered from the origin.”

Lopez said that once the system is in place, both TIEZA personnel and enterprises will undergo orientation prior to its implementation.

Later on, data generated by the system may also be used for analytics on the importation of enterprises, something that TIEZA has no available data yet. Further, other features such as online payment will be included in the system to further automate processes. – Text and photo by Roumina Pablo