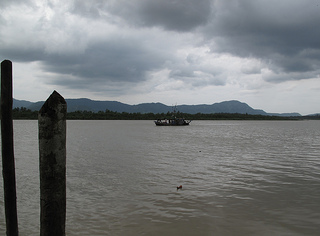 Myanmar and Thailand have agreed to jointly develop the Dawei Deep Sea Port and Industrial Estate in Myanmar in a bid to bolster economic growth in the two countries and neighboring Southeast Asian nations.

The two sides signed a memorandum of understanding this month to construct the Dawei special economic zone that will become a new logistic shortcut connecting the western and eastern side of the Indochina region.

“The project will serve as economic land bridge connecting Andaman Sea on the Myanmar side through Thailand and out to South China Sea creating great opportunities for expanding up-stream industries and linking supply chain in Thailand and in the region,” Thailand’s Board of Investment (BOI) said in a press statement.

Thailand’s Transport Ministry said it will need about THB48 billion (US$1.57 billion) to complete a transport network linking Myanmar’s Dawei deep-sea port and industrial estate to the Laem Chabang port in the eastern province of Chonburi in Thailand.

The BOI said it will offer local and international investors consultation assistance on the investment opportunities in and business startup process at the new mega project.

Thailand and Myanmar first agreed to jointly undertake the Dawei development in 2008 and signed a follow-up deal two years later. But the undertaking met setbacks when the Myanmar investor pulled out, investments did not come in, and the communities to be affected decried the alleged inadequate relocation compensation and possible environmental damage.

Under the initial plan, the project was supposed to be built in three phases from 2010 to 2019, and to consist of motorways, rural roads, and rail links.

With the new agreement, the first phase is expected to be finished by 2015.

Photo: some of Rebecca’s photos