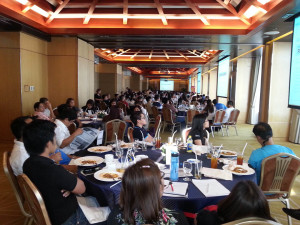 Calls are mounting for the release of Philippine government guidelines concerning the International Maritime Organization’s (IMO) policy on verified gross mass (VGM), with effectivity of the regulation less than four months away.

There was much confusion at a recent forum discussing IMO’s Safety of Life at Sea (SOLAS) VGM policy as it became apparent there were no government regulations specifically formulated to comply with the measure. The forum on the SOLAS VGM policy was organized by the Philippine International Seafreight Forwarders Association, Inc. (PISFA) and PortCalls on March 11 at the Diamond Hotel.

On July 1 this year, amendments to Chapter VI Part A Regulation 2 of the SOLAS Convention will take effect, requiring the shipper of a packed container to verify the VGM of a container and indicate this to the carrier or port operator before the box is loaded onto a vessel. Without the VGM, the container will not be allowed to load.

AISL general manager Atty. Maximino Cruz, during the forum’s Q&A, said guidelines are needed “as soon as possible” because without them, “we can foresee some possible port disruptions” once the VGM policy takes effect.

Questions “will be endless unless we have the guidelines in place,” Cruz noted, adding there are also “conflicting issues” stakeholders cannot just decide or solve among themselves.

Maria Cecilia Bejoc, Maersk-Filipinas, Inc.’s inland operations manager who was a forum speaker, noted there are issues that can only be answered by guidelines to be issued by the competent government authority.

These include the cutoff time for submitting the VGM; format to communicate the VGM; allowed method of submission; how to deal with non-compliance; and the allowable tolerance since weight of cargoes may be affected by natural factors such as humidity and handling.

Cruz said AISL is suggesting that PPA take the lead “because it handles 70% of all (Philippine) cargoes coming in and going out of the ports.” Other port authorities can follow suit after, he noted.

AISL previously met with PPA officials, and sent a letter to PPA officer-in-charge Raul Santos dated February 18, saying that “for the effective enforcement of the new IMO policy and to settle conflicts which may arise in the course of implementation, AISL believes that the Philippine Ports Authority should take the lead and act as the competent government authority in addressing and resolving the national issues.”

AISL acknowledged efforts of the PPA to release relevant orders and circulars on container weighing, but requested that “a new PPA order or circular be issued with specific reference to the SOLAS amendments on verified gross weight and taking into account the previous issuances of your office if still deemed applicable.”

Cruz noted that the AISL letter came with a list of frequently asked questions the PPA can use as reference in crafting the rules for SOLAS VGM implementation.

PPA Memorandum Circular (MC) No. 05-2006 focuses on the mandatory weighing of export loaded containers at the South Harbor and Manila International Container Terminal), while MC 23-2009 stipulates mandatory weighing of containers and roll on-roll off vehicles. Meantime, PPA Administrative Order No. 02-2012 lays down the guidelines in the operation of weighbridge facilities and services at PPA ports.

However, there are some rules specific to the VGM policy, according to Maersk’s Bejoc, such as the shipper’s responsibility to weigh the cargo and relay the information to the shipping line or terminal operator.

A shipper, as identified under SOLAS, is either the one named in the ocean bill of lading or sea way bill or in the equivalent multimodal transport document, or the one with whom (or in whose name or on whose behalf) a contract of carriage has been concluded with a shipping company.

SOLAS also indicated three methods of submitting the VGM—via the shipping line, the terminal operator, or a certified weighing facility.

“It’s up to the government body who will interpret the law if they will allow all three,” Bejoc noted.

As part of the new policy, shippers will have to factor in VGM compliance to their shipping cycle, especially when dealing with multiple shipping lines that have different cutoff times, Bejoc explained.

If the government, for example, mandates only a few entities allowed to weigh cargoes, then shippers must also take note of this in order to allocate time in going to those facilities, she said.

The shipping line official advised shippers to “calculate (for) possible costs” attendant to the introduction of the VGM policy, especially if there are third-party facilities involved in the process, as well as to be prepared for penalties that could arise from implementation of local guidelines.

Bejoc observed some countries have yet to perfect local regulations on the IMO policy, too, but said she hopes the Philippines will be among the first to issue clear guidelines “to avoid major disruptions” come July 1.

The SOLAS amendment was adopted in November 2014 to improve the safety of people and assets not only at sea but also inland, as the absence of an accurate weight declaration has caused accidents.

AISL’s Cruz added that if the SOLAS VGM is strictly implemented, “the overweight issue (with imports) will be minimized,” since shippers will be submitting accurate weights of their shipments. – Roumina Pablo