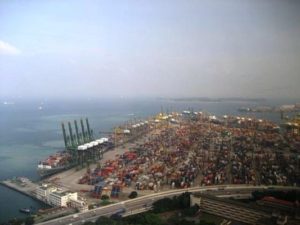 Singapore’s non-oil domestic exports (NODX) decreased slightly by 1.2% in May 2017, reflecting the fall in non-electronic exports off the high base a year ago, while electronic exports grew for the seventh month straight, according to the International Enterprise (IE) Singapore.

Year-on-year, electronic NODX expanded by 23.3% in May 2017, following the 4.8% increase in the previous month. ICs, PCs, and parts of PCs contributed the most to the growth.

Non-electronic NODX decreased by 9.0% in May 2017 year-on-year after the 2.9% decline in the previous month. Civil engineering equipment parts, non-monetary gold, and pharmaceuticals contributed the most to the decline.

Meanwhile, the city-state’s non-oil re-exports (NORX) grew by 14.3% in May 2017 year-on-year after the 0.3% decline in April 2017 due to the higher shipment of both electronic and non-electronic re-exports.

Year-on-year, electronic NORX increased by 13.8% in May 2017, following the 3.5% growth in April 2017. The rise in electronic NORX was due to ICs, telecommunications equipment, and parts of PCs.

Non-electronic NORX also grew, up by 14.8% in May 2017 year-on-year after the 4.1% decline in April 2017. The growth was due to non-electric engines & motors, aircraft parts, and personal beauty products.

NORX to all of the top 10 markets, except for South Korea, rose in May 2017. The top three contributors to the growth were the U.S., China, and Indonesia.

Singapore’s total trade rose over the year in May 2017, supported by both import and export growth. Trade expanded by 14.3%, extending the growth in the preceding months.

On the other hand, the volume of Hong Kong’s total goods exports increased 5.5% year-on-year in April, the Census & Statistics Department announced.

The volume of goods re-exports increased 5.7% compared to the same period last year, while that of domestic exports dropped 5.1%.

On a seasonally adjusted basis, the volume of total goods exports increased 1% in the three months to April.

Within this total, the volume of goods re-exports rose 1%, while that of domestic exports dropped 2.9%.

The volume of goods imports increased 1.1%.