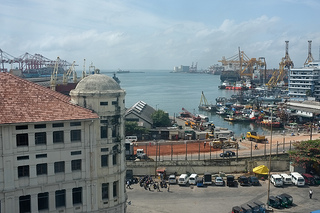 The Global Shippers’ Forum (GSF) wants a tighter watch over ocean carriers’ practice of imposing charges and surcharges following the Sri Lanka government’s ban on these fees at the country’s terminals starting next year.

The GSF, a UK-based international trade association of shippers engaged in the multimodal movement of goods, said it welcomed the recent intervention by the Sri Lankan government and its plan to introduce reforms to ensure fair trading practices.

“The proposed Sri Lanka reforms are likely to be a catalyst for wider demands, especially in the developing world, for greater regulatory oversight of liner shipping and shipping charging practices where anti-trust exemptions remain in place,” it said in a statement.

The GSF is calling for greater transparency in shipping charges, including terminal handling charges and other surcharges that it believes “do not reflect the real costs of the alleged ‘services’ provided.”

The Sri Lanka Shippers’ Council has been pushing the government to look into the lack of transparency supposedly prevalent in the country’s shipping industry over many years.

Recently the Sri Lankan government acted to strengthen the powers of the Director General of Merchant Shipping to deal with anti-competitive practices and unfair charges, and to create greater transparency into shipping charges.

“In the absence of effective competition in many regions of the world, there is a growing belief that tougher controls on liner shipping are needed to regulate carrier practices relating to freight tariffs to provide much needed transparency into shipping charges and surcharges,” said Chris Welsh, secretary-general of the GSF.

He added that the group favors a “market-led and fair competition approach to ensure open and competitive ocean transportation markets.”

If, however, open and competitive markets are absent, he said that it was increasingly likely that shippers would demand new regulatory agencies, or at least regulatory oversight of tariffs and charges, to ensure these fees were fair and equitable.

He continued: “I hope that a resolution of these long-standing grievances can be achieved before it comes to that, but momentum is building for a regulatory approach.”

The GSF will discuss the issue further at its annual meeting in Los Angeles, California, in March 2014.