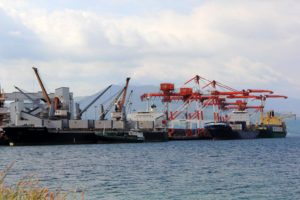 SBMA chairman and administrator Atty. Wilma T. Eisma said the projects are meant to improve core business infrastructure at the Freeport and sustain its attractiveness as a globally competitive trade and tourism center.

“We are now bidding out six major projects to set into motion the execution of a P530-million program to rehabilitate, upgrade and develop roads and other public facilities in the Subic Bay Freeport,” Eisma said in a statement.

“These form part of the SBMA’s P10.2-billion six-year infrastructure development program that will be funded by the national government and set for completion by 2023,” she added.

Eisma said this will be the first time SBMA has availed itself of national funding for its infrastructure projects. SBMA, a government-owned and controlled corporation, gets its expenditures from its earnings, but Eisma earlier noted that no law actually prohibits the Freeport authority from asking for general appropriation from the national government.

“But we feel justified not only because of the scope, but also because we’d like to think that these projects are investments on the part of the government,” she explained. She added that these projects “are necessary for Subic to sustain its position as one of the biggest revenue contributors among the investment promotions agencies in the country today.”

The SBMA chief pointed out that since the Americans left the naval base in 1992, Subic has not yet seen any major investment in infrastructure rehabilitation and maintenance of basic facilities like roads and docks, which are essential to business operations in the Freeport.

“Even the security fence that defined the area of the former Subic naval base has already deteriorated,” she added.

The other components of the program are various seaport and airport development projects, road widening and extension, and an SBMA corporate center, which gets the bulk of the budget at P3.8 billion.

Eisma said SBMA has scheduled the projects based on the immediacy of Subic’s needs as a maritime logistics hub, with the first projects encompassing roads, traffic controls, drainage, as well as buoys and other equipment. These are to be followed by seaport and airport improvements, road expansion, bridge and overpass projects, and finally the corporate center.

Meanwhile, SBMA will plow into Subic a total of P781.8 million in five years under its own capital expenditure program to complement the nationally funded infrastructure program.

One of the bigger projects under SBMA’s own program is the construction of a new perimeter fence in critical areas of the former U.S. military base, with P18 million in the first year of implementation and P42 million in the second year.