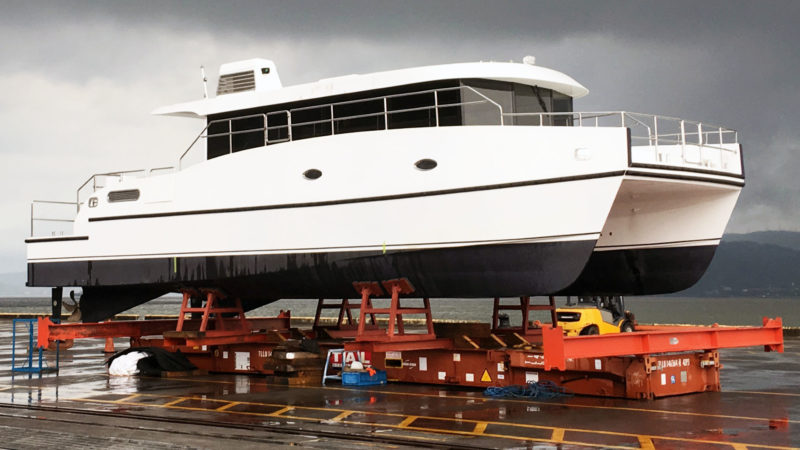 Subic Bay International Terminal Corp. (SBITC) handled its first flat rail operation in the Philippines when it loaded a brand-new catamaran onto a CMA CGM vessel.

SBITC, operator of the New Container Terminals 1 and 2 at Cubi Point in Subic Bay Freeport Zone, performed the operation with Peters & May, an international freight forwarder and yacht transport specialist, and Bespoke Load Solutions, patent owner of the flat rail system used to load the cargo onto the ship.

The flat rail system uses a simple and innovative solution to ship out-of-gauge cargo with dimensions that exceed the specifications of 40-foot flat racks.

“The flat rail System consists of two beams which are secured to the flat rack with twist-locks. With lifting points at the end of each beam, the complete unit load can then be loaded using slings attached to the spreader of the container gantry crane,” explained Chris Steibelt, development manager at Bespoke Load Solutions.

“Typically, a flat rail shipment will be in the range of 12 to 15.5 meters long and the width blocks the corner castings. The system can safely accommodate payloads of up to 44 tons,” Steibelt added.

Using flat rails, the catamaran was loaded onto a single 40-foot flat rack. The process was simplified into two moves—first, sea to berth, and second, berth to vessel after the cargo is lashed to the flat rack and flat rail.

Traditionally, without the rails, the shipment would require at least six flat racks. The catamaran would be loaded as breakbulk and lashing would be done on board the vessel. This method is significantly less efficient and more costly for the shipper because of the larger vessel space occupied by the cargo, and longer port stay due to extended loading time.

“SBITC has demonstrated its capability and flexibility to safely and efficiently handle complex shipments such as this. We have eight more catamarans on the way, and we are confident that we could further improve our process and deepen our partnerships with other businesses that require customized service to expand their markets,” SBITC president and general manager Roberto Locsin said in a statement.

Built by full-service yacht agent Asia Pacific Marine-Subic, the 14.3-meter, twin-hull boat is export-bound for the Maldives, the first of 10 catamarans commissioned by an exclusive resort group operating in six continents.

“We intended to deliver the catamaran in brand-new condition. With the guarantee by SBITC that they can safely handle our cargo, we know it is the best option for us,” Asia Pacific Marine managing director Miguel Ramirez said.

Yacht shipping remains an uncommon service in the Philippines, with importers and exporters opting to discharge and load their boats in nearby countries before sailing them directly to and from the Philippines. SBITC said it hopes the success of this particular project would eventually pave the way for yachts to be transported using Philippine ports.