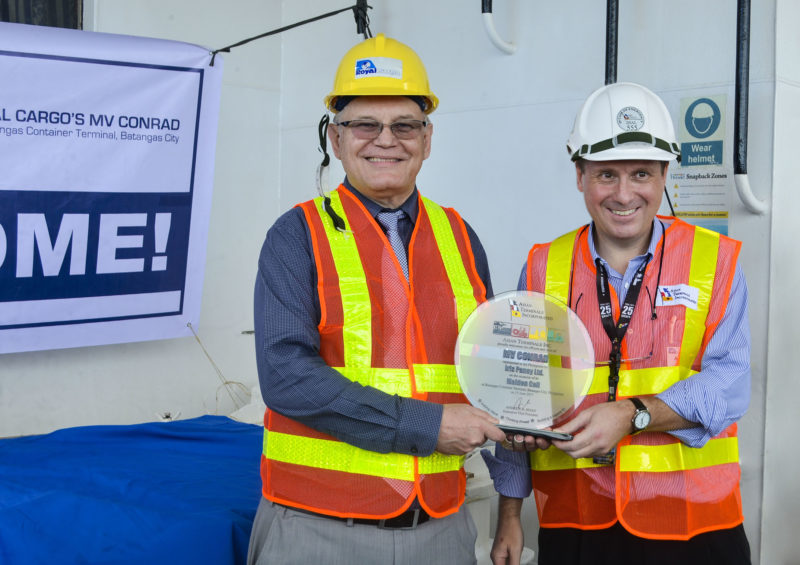 The MV Conrad, a 1,118 twenty-foot equivalent unit (TEU) capacity vessel, arrived in Batangas Container Terminal on June 13. The vessel, with a deadweight tonnage of 13.751 and a maximum speed of 20 knots, made a direct call from the Port of Rotterdam, bringing with it 186 forty-foot reefer containers loaded with meat for a single client.

Another vessel is in the process of being acquired and will be available by year-end.

Raeuber pointed out that opportunities presented by a growing Philippine economy compelled the company to re-enter the liner business.

Setting its sights on the Philippines’ potential to become a major logistics hub by 2020, Raeuber said, “Royal Cargo Group is making strategic capital investments to answer demands and spur business and economic growth.”

MV Conrad is expected to start operations on July 7, pending receipt of its Certificate of Public Convenience from the Maritime Industry Authority. It will be deployed on the Batangas-Mindanao or Manila-Mindanao route.

“One port we want to serve along the way is Zamboanga,” Raeuber divulged. He said Zamboanga, which has northbound cargoes, “needs bigger vessels.”

The shipping operations will be handled by a subsidiary, Iris Logistics. Raeuber said they may co-load with domestic carrier MCC Transport Philippines in the future.

Asked what the government can do to make the industry competitive and in the process lower shipping costs, Raeuber said some rules need revisiting, such as the mandatory requirement for local vessels to dry dock only in Philippine-registered shipyards.

He asked, “Most of the Philippine shipyards are foreign investments anyway so whom are we protecting here?”

Domestic shipping lines have long been asking the government to allow certain vessels to dry dock overseas, where rates are cheaper.

Another area the government can look at, he said, is taxation, especially on fuel. He noted that fuel in the county is “very expensive.”