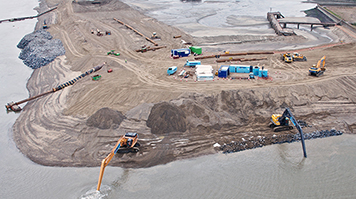 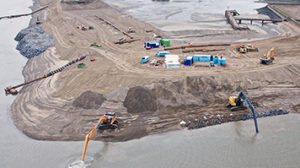 On July 21, Estrada and representatives of R-II Builders signed the pact that involves two phases of development and has a total project cost of almost P7.4 billion.

The entire cost of reclamation as well as capital expenditures and securing of financing for the project’s completion will be shouldered by R-II Builders.

R-II Builders is a construction conglomerate engaged in port development and operations, low-cost housing, infrastructure, solid waste disposal, and property management, among others. It is also the mother company of Harbour Centre Port Terminal, Inc. (HCPTI), which operates the bulk and break-bulk terminal.

Phase 1 of the reclamation project will use the reclaimed 20 hectares to add a kilometer-long berthing facility for apron and backup area for bulk and break-bulk cargo.

Phase 2 will convert 30 hectares of reclamation into a mixed-use development, including road networks, utilities, and other facilities.

Raw land reclamation works for Phase 1 is slated to be completed within one year, and Phase 2 is scheduled to be finished in the next one-and-half years.

As payment, ownership of 35 hectares of the 50-hectare reclaimed area will go to R-II Builders. The 15 hectares from the 30-hectare mixed-use area will be retained by the government.

A portion of the 15 hectares is being eyed by the city government as a relocation site for the oil refineries in Pandacan, a residential area where the facilities pose safety hazards to the residents.

HCPTI, in a statement, said the project will double the capacity of Harbour Center, “which has been experiencing difficulties in accommodating the increase in the volume of vessels and cargoes at the port.”

It said the terminal’s annual cargo volume has increased from 3 million metric tons (mmt) to 6 mmt over the past five years, “necessitating an urgent reclamation project to help address the problem.”

The additional 1 kilometer will extend Harbour Centre’s berth to a total of 2,115 meters and enable it to accommodate from 14 to 16 large vessels at a time.

With the additional 20 hectares from the 50-hectare reclamation project, the terminal’s apron and backup area are also set to expand to a total of 32 hectares from the current 12 hectares, giving it surplus capacity for future increases in cargo volume.

“The expansion can help speed up vessel turnaround time significantly because of the additional space for the movement of trucks, systematic loading and unloading of cargoes, and storage management,” HCPTI noted.

“This project will help provide solutions to a lot of problems in Manila, including the expansion of its land area and the generation of additional revenues from the creation of new premier property as sources of realty and corporate income taxes, among others,” Estrada said at the signing of the agreement with R-II Builders’ president Engr. Vic Songco.

Estrada pointed to the current congestion at the Port of Manila as an aggravating factor for the traffic condition in the Port Area and the cause of rising logistical costs, which in turn increases the prices of commodities sold in the city.

He said the project will provide a dedicated space for warehouses, storage facilities, and other port activities in a self-contained area away from the congested streets of Manila.

A P38-billion joint venture project has also been forged between the city government of Davao and HCPT sister firm Mega Harbour and Port Development Inc., both under the umbrella of R-II Builders.