The Philippine Ports Authority (PPA) is giving cargo owners and shippers 15 days from March 1 to withdraw their customs-cleared cargoes in Manila ports or face forced transfer, “through the port operators”, to another port or inland container depot. The cost of transfer will be borne by the importer, consignee, cargo owner and shipper.

The PPA directive is contained in a Notice to the Public signed by PPA general manager Atty. Jay Daniel Santiago, issued on February 28 and published on March 1. The order is designed to free up space in these ports, which have seeing high utilization of late.

According to a PortCalls source, around 4,300 Bureau of Customs (BOC)-cleared containers are currently inside the Manila International Container Terminals–1,400 of which are overstaying beyond 30 days and the rest beyond 15 days. 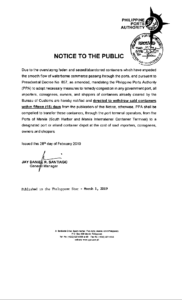 “Due to the overstaying laden and seized/abandoned containers which have impeded the smooth flow of waterborne commerce passing through the ports… all importers, consignees, cargo owners and shippers already cleared by the Bureau of Customs are hereby notified and directed to withdraw said containers within fifteen (15) days from the publication of this notice, otherwise PPA shall be compelled to transfer these containers, through the port operators, from the Port of Manila (South Harbor and Manila International Container Terminal) to a designated port or inland container depot at the cost of said importers, consignees, cargo owners and shippers,” the notice said.

PPA pointed out its order is pursuant to Presidential Decree No. 857 (revised charter of PPA), as amended, which mandates the port authority “to adopt measures to remedy congestion in any government port.”

In a text message to PortCalls, Santiago noted PPA discussed the directive prior to its release with BOC and port operators.

The PPA chief, who said yard utilization at Manila ports is high, is confident there are “enough trucks to handle pull-outs.”

Prior to PPA’s directive, BOC-Manila International Container Port announced it will be moving out around 2,000 overstaying containers as one of its measures to free up space in MICT.

The Association of International Shipping Lines, Alliance of Concerned Truck Owners and Organizations, Container Depot Alliance of the Philippines, and International Container Terminal Services, Inc. on Feb 19 have also agreed to transfer 5,000 overstaying containers out of MICT.

In addition, port operator Asian Terminals Inc. and several international shipping lines have agreed also on Feb 19 to move out thousands of empty containers via Manila South Harbor in the next few weeks.

Some foreign shipping lines have transferred some empty containers to the ports of Batangas and Subic, from where the boxes will be evacuated.

BOC on Feb 18 issued an order to transfer all empty containers from MICT and Manila South Harbor to Subic port and Batangas port.

Further, BOC is drafting a customs memorandum order (CMO) addressing the issue of the return of empty containers. The draft CMO contains provisions that discourage storing empty containers in container yards and promote their storage at outside depots. It likewise provides rules that will allow only those empty containers scheduled for loading onto ships to be brought inside the yards.

Aside from these, BOC issued several orders last year to fast-track the processing of alert orders and lodgement of goods declaration to help ease port congestion.

A joint administrative order that will regulate local charges imposed by international shipping lines and provide measures to address port congestion is also being reviewed by the departments of trade and industry, finance, and transportation. – Roumina Pablo