The increase in the excise tax on fuel brought about by the passage of the new Tax Reform for Acceleration and Inclusion (TRAIN) Law will raise domestic shipping lines’ and truckers’ charges, according to the Philippine Inter-island Shipping Association (PISA) and Confederation of Truckers Association of the Philippines (CTAP).

In a presentation during the “Understanding TRAIN: What’s at Stake for the Cargo Transport Industry” forum on March 16 conducted by the Philippine Multimodal Transport and Logistics Association, Inc and PortCalls, PISA executive director Atty. Pedro Aguilar, said that based on their group’s study, the higher excise tax on fuel will increase freight cost for container ships by P685 to P800 per twenty-foot equivalent unit (TEU).

For tankers except those on time charter, freight may increase by 5% to 10%.

Aguilar added that the increase could even be higher for bigger vessels since they consume more fuel.

Aguilar said PISA—the umbrella organization of domestic shipping groups—does not have data yet for roll-on/roll-off and passenger vessel operations.

Republic Act (RA) No. 10963 or TRAIN—the first package of the government’s Comprehensive Tax Reform Program—introduced an excise tax on diesel and bunker fuel, with a staggered implementation of P2.50 per liter in 2018, P4.50 per liter in 2019, and P6 per liter from 2020 onwards.

Bunker fuel is used in the main engine of cargo ships and tankers, while diesel is used in generator sets (gensets) and by fast craft and small vessels. Lubricating oil, on the other hand, is used in both main engines and gensets.

Aside from vessel operations, Aguilar said other service rates might also increase due to the higher fuel excise tax, such as tugboat assistance, pilot launch, and other ancillary services. He added that domestic shipping lines also expect cargo-handling operators to ask for a rate increase, as their equipment also uses fuel.

Aguilar, meanwhile, noted that foreign shipping lines calling the Philippines do not pay duties and taxes when bunkering or refuelling in the country. 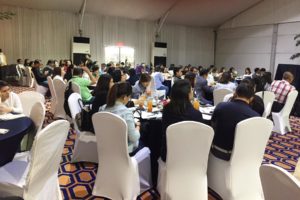 Philippine Liner Shipping Association (PLSA), a member of PISA, last January had informed Marina that most of its members “will be constrained to impose a cost recovery mechanism, Excise Tax Recovery Charge (ETRC)…” due to the increased excise tax on fuel.

The ETRC will be computed per TEU based on the actual excise tax added per liter of fuel and oil multiplied by the member line’s actual fuel consumption over its laden TEU-volume carried.

CTAP chairman Ruperto Bayocot, in a speech during the same event, said truckers will surely increase their rates due to steeper operational costs as a result of the higher fuel excise tax. How much the increase will be will depend on the discretion of the trucker, Bayocot noted, as CTAP has already stopped issuing guiding rates.

CTAP in 2015 discontinued the issuance of guiding rates in compliance with the Philippine Competition Act of 2015, and with the request of the Export Development Council.

Bayocot said that if a member trucker is asking for excessive rates, importers and other clients may contact CTAP, or look for other truckers giving more competitive rates.

Department of Finance (DOF) Fiscal Policy and Planning Office director Elsa Agustin, in the forum’s keynote address, said the DOF “recognizes that among the revenue-generating measures (under TRAIN), the increase in petroleum excise tax has the biggest and direct impact on the cargo transport industry.”

She said that this is why DOF has “placed a safety valve that when Dubai crude exceeds US$80 per barrel, we are going to freeze the oil increase so that we do not unduly affect the consumers.”

However, Agustin said that based on DOF’s analysis, overall inflation might increase less than 1% due to higher oil prices by 2018, with food prices likely to increase up to 0.3%, and transportation up to 0.1%.

“This is very minimal and manageable, especially compared to the savings from lower income taxes. History supports this analysis. Between January 2016 and January 2017, diesel increased by almost P14, which is equivalent to a 76% increase. However, inflation remained stable, and food, transportation, and electricity, gas, housing, and water did not increase significantly,” Agustin explained.

Meanwhile, Agustin said trailers and trucks continue to be exempt from the automobile excise tax. Pick-up trucks and purely electric vehicles are also exempt from the excise tax, while hybrid cars will be taxed at 50%.  – Roumina Pablo