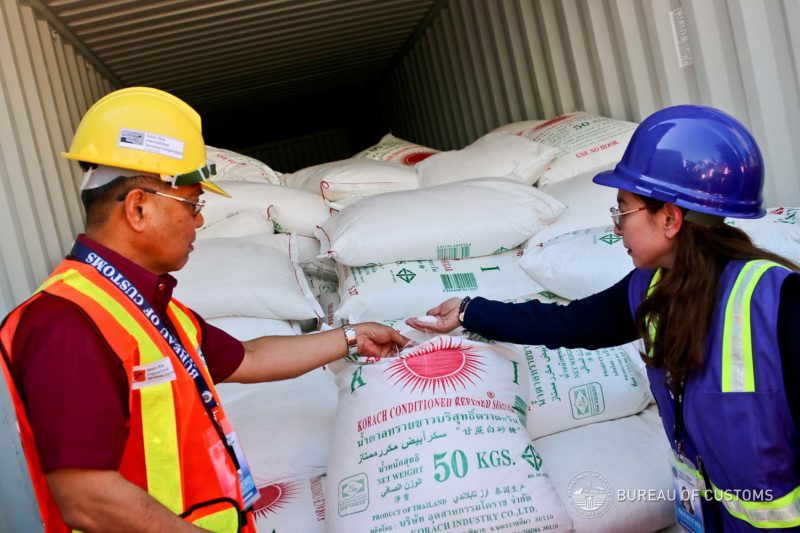 The Bureau of Customs (BOC) recently seized P60 million worth of misdeclared sugar and firecrackers that smugglers attempted to bring into the Philippines through Subic port.

Acting on derogatory information, BOC Subic port district collector Maritess Martin issued an alert and ordered the 100% examination of 35 forty-foot containers that arrived from Hong Kong on March 31 and April 7, and were consigned to JRFP International Trading.

According to Martin, 34 of the containers, misdeclared as floor mats and plastic floor coverings, were found to contain 21,760 bags of refined sugar from Thailand, while the remaining container was found to contain several boxes of firecrackers.

A warrant of seizure and detention was issued against the shipments on April 12.

Customs commissioner Rey Leonardo B. Guerrero immediately ordered the customs accreditation of both the importer and the customs broker of the shipments revoked. Appropriate charges will also be filed against them for violation of Section 1401 (Unlawful importation or exportation) of the Customs Modernization and Tariff Act.

“We will not allow illicit traders to continue to violate our laws. The Bureau of Customs is consistently working on boosting our anti-smuggling measures through the acquisition of upgraded tools for inspection and examination and close coordination with our partner-agencies such as the Philippine Drug Enforcement Agency (PDEA), the Philippine Coast Guard and the Armed Forces of the Philippines to beef up our fight against smuggling,” Guerrero said in a statement.