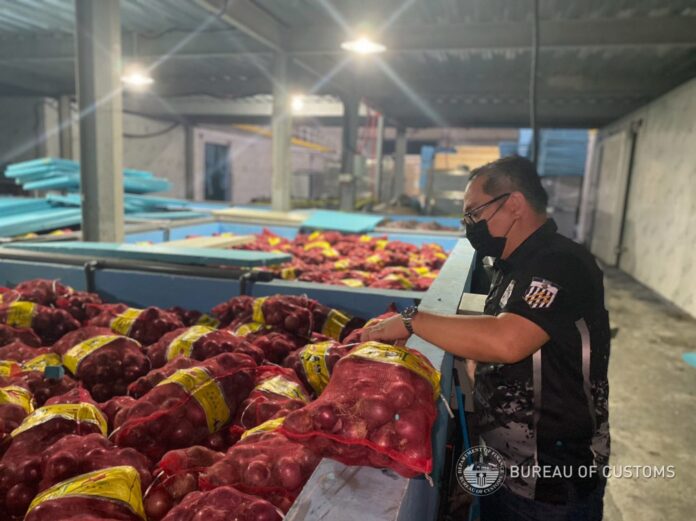 The Bureau of Customs (BOC) has seized P50 million worth of imported goods, including cosmetic, health, and agricultural products, from a warehouse in Meycauayan, Bulacan.

The seizure was the result of an operation conducted by joint elements of the Manila International Container Port-Customs Intelligence and Investigation Service, Intelligence Group, and Philippine Coast Guard Task Force Aduana on a warehouse owned by Elite Globus Primeholdings Corp. located in Brgy. Bahay Pare in Meycauayan.

BOC said the operation, staged on October 7, led to the discovery of 2,000 concealed sacks of imported red onions and several boxes of frozen seafood, cosmetic and health products, all of which had no approval from the Food and Drug Administration (FDA), as well as assorted infringing goods and other household goods.

The articles, which were imported in violation of Intellectual Property Rights and FDA regulations, were forfeited and are due for condemnation.

The owner of the agricultural and household products was given 15 days to present proof of payment of duties and taxes, as mandated under Section 224 (Power to Inspect and Visit) of Republic Act No. 10863, or the Customs Modernization and Tariff Act.

The warehouse has been temporarily padlocked to secure the seized imported goods while a customs examiner undertakes an inventory.

BOC earlier said that from January 1 to August 23 this year, it has seized P19.95 billion worth of goods from 615 operations, which yielded mostly illegal shipments of narcotics, counterfeit goods, cigarettes and other tobacco products.