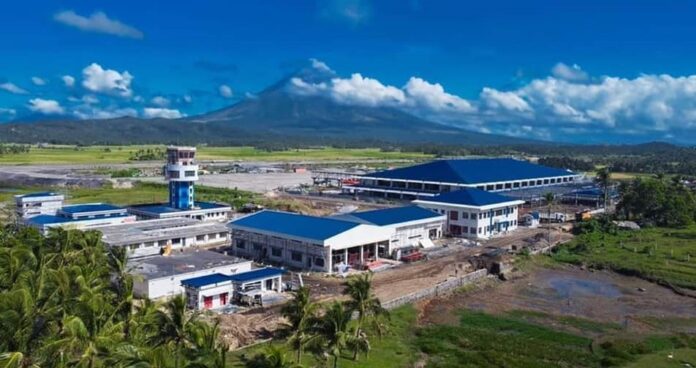 Construction of the P4.798-billion Bicol International Airport (BIA) is 89% complete, with the project expected be operational before the end of the year, according to the Department of Transportation (DOTr).

BIA, dubbed the “country’s most scenic gateway” with the iconic Mayon Volcano for its backdrop, is expected to be technically operational for day operations by October 7 and to be night-rated by November 4, 2021.

DOTr said contractors of the airport project have committed to complete all civil works under their respective contracts by August 30.

The 89% accomplishment rate as of July 28 includes Package 2A and Package 2B.

Package 2A is 96% accomplished and expected to be fully completed by August 30, subject to further necessary works after inspection by DOTr and the Civil Aviation Authority of the Philippines (CAAP).

Included in Package 2A is construction of the air traffic control tower, administration building, crash fire rescue building, and cargo terminal building, among others.

Package 2B is 86% completed and for full completion by end August 2021, but also subject to further necessary works after inspection.

Included in Package 2B is construction of BIA’s passenger terminal building, now 90.5% complete and expected to be finished by August 31, 2021. Part of Package 2B is extension of the airport’s runway, already 75% finished and for completion by end-August.

Once done, the gateway is seen to boost air traffic in the Bicol region and accommodate a total of 2 million passengers annually.

Pre-construction of the international airport began in 2008 but was delayed several times.