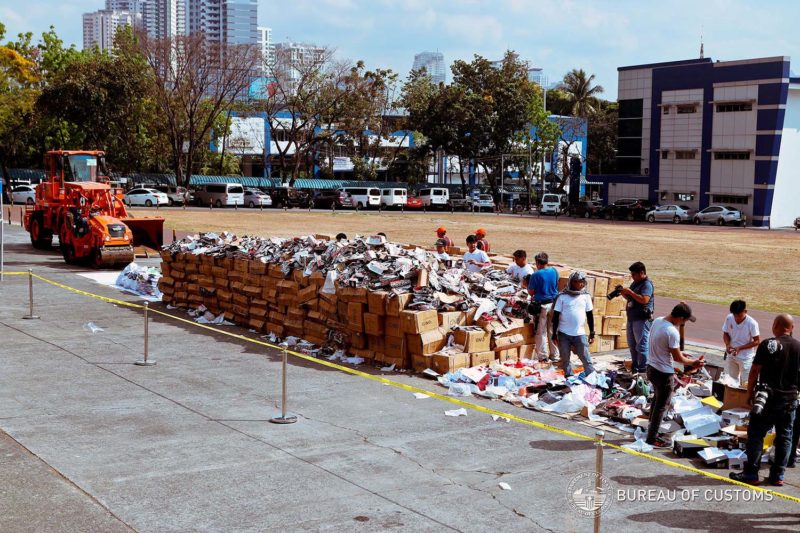 The Intellectual Property Office of the Philippines (IPOPHIL) destroyed various fake goods with an estimated worth of P1.8 million seized and turned over by the Bureau of Customs (BOC).

The goods included shoes, watches and soaps and were destroyed by IPOPHIL after the ceremonial turnover on April 12 that was part of the celebration of National Intellectual Property Rights Month.

The goods were among counterfeit items seized by BOC in various areas and ports as a result of its continued efforts to secure the country’s borders and fight proliferation of counterfeit goods in the local market.

Among those destroyed were six fake Rolex wristwatches from Thailand seized by BOC Port of Clark last February 5. The items were found inside the luggage of an arriving passenger at Clark International Airport after the luggage was physically examined to verify suspicious x-ray images.

A warrant of seizure and detention was immediately issued by acting district collector Atty. Lilibeth Sandag against the parcel for violation of Section 118 (f) and Section 1113 (f) of Republic Act (RA) No. 10863, also known as the Customs Modernization and Tariff Act.

Importing fake goods is prohibited under RA 8293, otherwise known as the Intellectual Property Code of the Philippines.

Meanwhile, assorted fake shoes and soaps were seized in an operation conducted by operatives from the Intellectual Property Rights Division under BOC’s Intelligence Group in Sucat, Parañaque on January 29, 2019.

“The BOC will remain steadfast in securing our borders and in protecting the local consumers against fake and hazardous goods,” Customs commissioner Rey Leonardo B. Guerrero said in a statement.