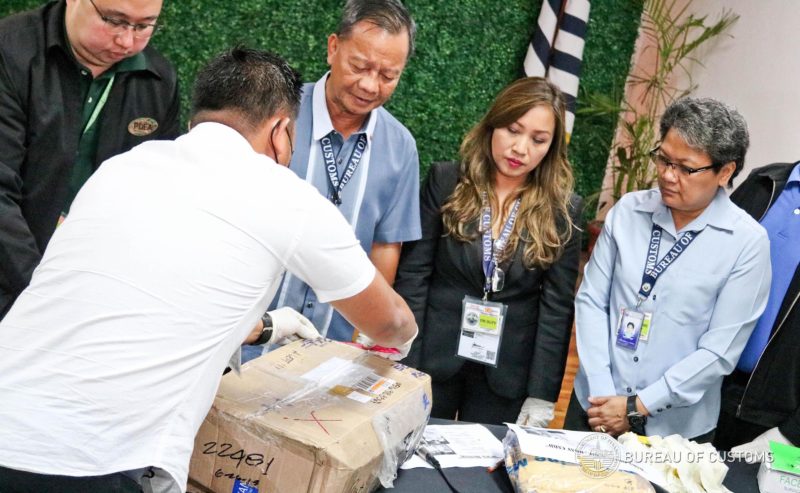 The Bureau of Customs (BOC)-Port of NAIA turned over to the Philippine Drug Enforcement Agency (PDEA) on Oct 11 illegal drugs with an estimated worth of P14.629 million.

The first parcel was seized after it was found to contain 2,329 grams of cocaine with an estimated street value of P12.345 million concealed in the supplementary sheet. The parcel consigned to Johnmel Natividad with address at Blk 15, Lot 5, Sta. Isabel, Caloocan City was shipped by a certain Thiago F. Paulo from Sao Paolo, Brazil at the Central Mail Exchange Center.

Around 204.9 grams of shabu was also discovered hidden inside a parcel declared as dressed baby suits and birthday card. The parcel from the United Kingdon has a street value of P1.43 million and was consigned to Joy Bido Marieo of Blk 81, Lot 13, Zone 9, Bautista, Sampaloc 4, Dasmariñas, Cavite.

Likewise seized was a parcel containing 500.42 grams of marijuana worth about P850,000 concealed in a portable heater. It was addressed to Raven Delosa of Quezon City and originated from California, USA.

To date, the Port of NAIA has conducted a record-breaking 27 drug busts from April to October 2018 and has been exceeding its revenue collection target from May to September 2018.

In a separate event, BOC-NAIA turned over to the Department of Social Welfare and Development (DSWD) assorted clothes, beddings, pillows and blankets to aid victims of typhoon Ompong in Cordillera Administrative Region. The activity is in compliance to President Rodrigo Duterte’s directive to the Bureau of Customs to give to DSWD BOC-seized goods to aid those affected by Ompong.

BOC-NAIA also turned over to the Department of Environment and Natural Resources a live mangrove snake concealed inside a black sock and declared as power supply intended for export to Taiwan. The importation of wildlife animals is a violation of Republic Act 9147 or Wildlife Resources Conservation and Protection Act.