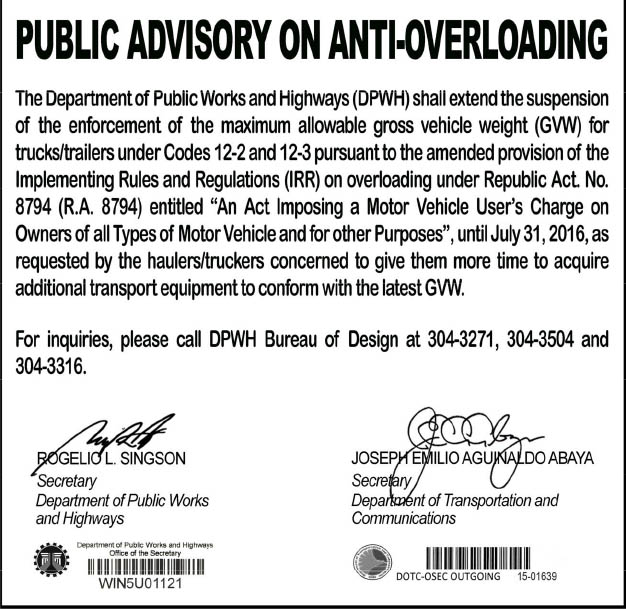 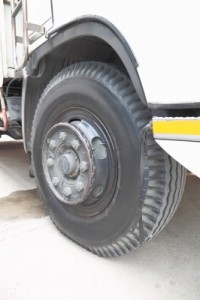 The Department of Public Works and Highways (DPWH) has formally extended for one year the moratorium on implementation of the anti-overloading policy covering certain types of trucks.

A public advisory signed by Public Works Secretary Rogelio Singson and Transport Secretary Joseph Emilio Abaya extended the “suspension of the enforcement of the maximum allowable gross vehicle weight (GVW) for trucks/trailers under codes 12-2 and 12-3” until July 31, 2016.

DPWH said the extension is in response to truckers’ request for more time to acquire units that will conform with the GVW requirement under Republic Act (RA) No. 8794 or “An Act Imposing a Motor Vehicle’s Charge on Owners of All Types of Vehicle and for Other Purposes.”

The advisory formalizes Singson’s verbal agreement with Confederation of Truckers Association of the Philippines (CTAP) director Alberto Suansing to extend the moratorium which expired on July 31, 2015. 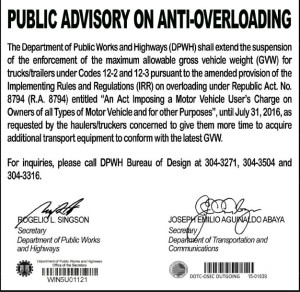 CTAP earlier said more than 50% of trucks nationwide are classified under the two codes, and that the only way truckers can comply with the directive is if the allowable GVW is upgraded to 54,000 kilograms, higher than the 41,000 kilograms specified in the revised implementing rules of RA 8794.

Under the revised IRR of RA 8794, trucks and trailers with codes 12-2 and 12-3 with loads exceeding the prescribed GVW of 41,500 kilograms and 42,000 kilograms, respectively, and load per axle of 13,500 kilograms are considered overloaded and prohibited from traveling.

Image courtesy of Keerati at FreeDigitalPhotos.net