MNHPI has been running Navis SPARCS N4, a TOS used in more than 100 terminals around the world, since 2016 in parallel with a previous TOS. But on February 19, the port operator decided to run Navis N4 exclusively. Stakeholders claim they were not informed in advance of the implementation.

The Philippine Liner Shipping Association (PLSA), whose members are the main clients of Manila North Harbor, has complained to the Philippine Ports Authority about delays that attended the transition.

An MNHPI client advisory dated Feb 22 said “a storage waiver system (is) in place for this week as may be necessary.”

In a letter to PPA Port Management Office-National Capital Region North Port manager Rosenda Sumagaysay dated February 20 and received February 21, PLSA said it has “received reports from our members regarding the ongoing MNHPI N4 system implementation which has caused unnecessary delay in the receipt, release and delivery of cargoes/containers at the NH port and resulted (in) undue costs to truckers, shippers and shipping lines.” 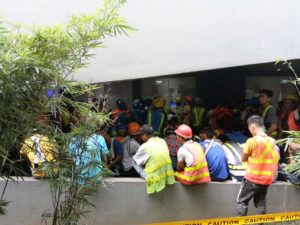 “MNHPI, in its efforts to upgrade its system, should have ensured a smooth and efficient transition in the implementation of its N4 system. With the delays in the acceptance and delivery of the cargoes as well as in the loading and unloading operations experienced since yesterday, MNHPI should compensate stakeholders, i.e. truckers, shippers and shipping lines as they are made to bear unnecessary costs. Moreover, storage incurred due to delays should be waived,” PLSA stated.

In its Feb 22 client advisory, MNHPI explained that the transition “has become necessary to ensure the elimination of many manual processes, and that we are able to meet future customer growth and productivity expectations.”

It said the new system “has become a requirement to establish standards at the terminal that will ensure a level, transparent, and common environment for our customers.”

The port operator acknowledged that “transitions of this type are difficult and we are aware of, and apologize for, the impact on all of you and your customers.”

In a follow-up statement provided to PortCalls on February 23, MNHPI said it “is in the final stages of the transition to an automated terminal operating system” for Manila North Harbor.

MNHPI said it expects the situation at the Manila North Harbor to have normalized by the weekend.

Compared to implementation in other terminals, operating Navis N4 in Manila North Harbor is more complex because the port handles not only containerized cargoes but break bulk and roll-on/roll-off cargoes and vessels as well, former MNHPI chief executive Richard Barclay had previously told PortCalls. – Roumina Pablo