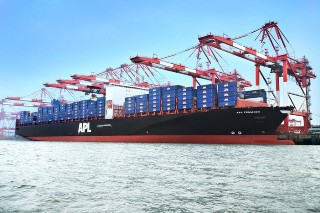 NOL said APL Temasek’s sister ships will likewise be named after icons of the island-state.

Also the largest container ship to be registered in Singapore, the APL Temasek is the first in a series of 10 vessels of such capacity on order by the Singapore-based shipping and logistics group.

The delivery of the ship follows that of 10 new 10,000-TEU ships which joined the fleet between 2011 and 2012. These newbuildings are part of a US$4-billion fleet-renewal program intended to replace older, less efficient ships that will be either sold or returned to charter owners.

The 14,000-TEU series of ships is designed to improve slot costs, save fuel, and reduce the company’s environmental footprint.

The APL Temasek is currently plying loop 4  of the Asia-Europe trade.