NLEX, CAVITEX to charge higher toll rates from May 12

New toll rates will be implemented starting May 12 on North Luzon Expressway (NLEX) and at the Manila-Cavite Toll Expressway (CAVITEX) Parañaque Toll Plaza.

In separate statements issued on May 10, toll operators NLEX Corp. and Cavitex Infrastructure Corp. (CIC) said the Toll Regulatory Board (TRB) has given them the go-signal to charge the increased rates.

For NLEX, TRB approved a P2 increase in the open system and P0.34 per kilometer on the 6.4-km new lane, two new bridges in Jadjad and Argonaut, and a new tunnel.

Under the NLEX new toll fee matrix, motorists traveling anywhere within the open system will pay an additional:

Those traveling end-to-end on the NLEX between Metro Manila and Mabalacat City will pay an additional:

To help cushion the impact of the toll increase, public utility jeepneys under the NLEX Passada and Tsuper Card discount and rebate program will continue to enjoy the old rates. Provincial buses will also be covered by a graduated rebate scheme for a period of three months.

Meanwhile, CIC said TRB approved the 2011 and 2014 contractual tariff adjustments toll petitions of CIC and joint venture partner Philippine Reclamation Authority (PRA), as well as its add-on toll petition for Phases 1 and 2 enhancement works done in CAVITEX R-1 Expressway that was completed in 2020. 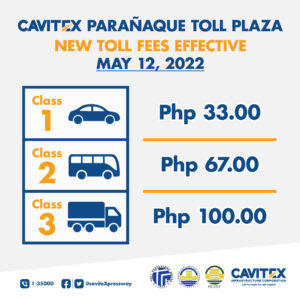 The approved petitions translate to:

Motorists will pay the following amounts based on the new toll fee matrix (VAT included):

To help PUV operators and drivers cope with the new rates, CIC and PRA will provide them a toll rate reprieve through a rebate program that will cushion the impact of the higher toll rates.

Among enhancements done were the completion of the asphalt overlay on the entire stretch of CAVITEX, provision of the Pacific flyover and left turn facility, bridge widening, and its regular heavy maintenance works to ensure road quality and safety for motorists, among others. CAVITEX is being used by an average of 160,000 motorists per day.